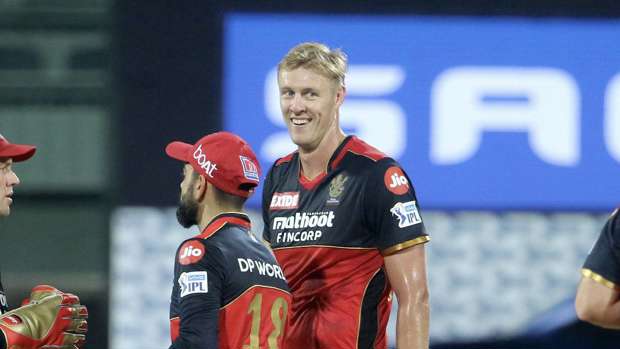 Rising Black Caps star Kyle Jamieson made his Indian Premier League (IPL) debut overnight, and starred in helping to lead his Royal Challengers Bangalore side to victory in the season opener.

Jamieson became an instant millionaire in February after fetching a whopping $2.86m salary in the IPL's annual auction, despite never playing in India before and appearing in just four Twenty20 International matches at the time.

While Jamieson had well-and-truly proved his worth with the ball in test cricket over the preceding 12 months, his unproven record in the shorter form of the game was immediately exposed when the Black Caps faced Australia later that month.

In four matches against Australia, Jamieson conceded 175 runs at 11.66 per over while taking just the one wicket. There's no doubt the Bangalore side became nervous about their star signing's true ability in that format.

However, Jamieson's bowling debut went smoothly with a debut wicket and a crowd-pleasing, bat-cracking yorker amongst his highlight reel in the match.

Bowling the 11th over of the Mumbai Indians innings, Jamieson dismissed Indian international Suryakumar Yadav with a short and wide cross-seam delivery outside off stump which the batsman edged to wicket-keeper AB de Villiers.

Then, bowling the penultimate over of the innings, Jamieson bowled a yorker on middle stump that broke Krunal Pandya's bat into two pieces. The bat's handle remained in Krunal's hands, but the rest of the willow broke and fell to the ground.

inishing with figures of 1-27 from his four overs, Jamieson impressed with his variations and disconcerting bounce in his first experience of sub-continent conditions.

His side eventually restricted the Indians to 159/9, a total that proved challenging but ultimately gettable, as Bangalore recorded a two wicket victory via solid batting contributions from Virat Kohli (33), Glenn Maxwell (39) and AB de Villiers (48).

Fellow Black Cap Trent Boult finished with figures of 1-36 from his opening four overs of the tournament.