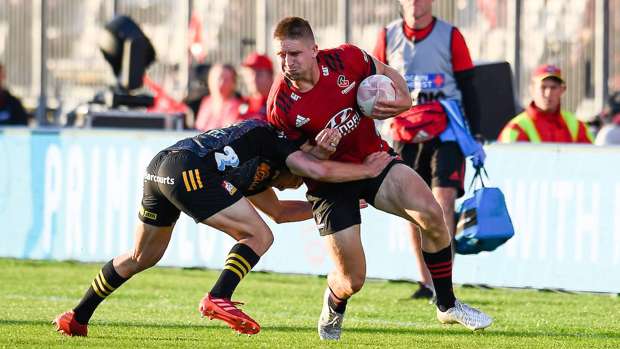 All Blacks midfielder Jack Goodhue has been ruled out of the entire rugby season after suffering a serious knee injury.

Goodhue was helped from the field with an injury to his left knee in the 21st minute of the side's golden point win over the Hurricanes on Sunday.

The Crusaders confirmed in a statement that he ruptured an ACL.

"He will require surgery, and is not expected to be available for any further rugby in 2021," the Crusaders said.

The Crusaders also provided an update on prop Joe Moody who had scans which confirmed a significant injury to the soft tissues at the base of his big toe.

He will see a specialist in the next fortnight and a return timeframe will be clearer then.

Goodhue started in five tests in 2020 and has been a regular in the squad after making his debut in 2017.

It's another blow for the All Blacks' 2021 campaign with captain Sam Cane and fellow loose forward Ardie Savea also suffering serious injuries in recent weeks.

Cane is to miss the remainder of the Super Rugby Aotearoa season and a chunk of the All Blacks campaign after suffering a pectoral injury while playing against the Blues on March 27.

Savea provided an update on his MCL knee injury on his social media channels on Tuesday, saying he will likely be out for up to eight weeks.

The All Blacks are set to start their season in July – Covid-19 permitting – with Italy scheduled to visit New Zealand for two tests and Fiji for a one-off showdown.

Young Highlanders halfback Folau Fakatava – a likely All Blacks bolter who has impressed with his performances this season – also suffered a season-ending injury this month.

The Highlanders announced last week that the 21-year-old had torn his ACL and will require surgery, ruling him out for nine to 12 months.