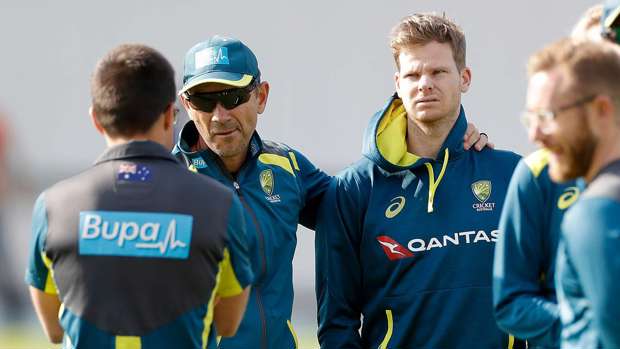 Australia coach Justin Langer has rushed to Steve Smith's defence after the batting superstar was embroiled in controversy during the third test against India, saying it's "absolutely ludicrous" the 31-year-old has been accused of cheating.

English cricket figures were quick to rip into Smith after he was caught on camera scuffing up Indian wicketkeeper Rishabh Pant's guard on day five in Sydney.

Smith was upset by the fierce criticism and captain Tim Paine said there was nothing sinister about the incident, instead putting it down to a quirky habit of his famously eccentric teammate.

Langer said he called Gough and Vaughan about their comments, taking exception to what he feels was an unfair attack on Australia's best batsman.

"I've actually spoken to Darren Gough about it and rang him last night," Langer said on SEN Mornings. "I spoke to Michael Vaughan as well. I thought he was out of line actually.

"You get it from [some critics], but I don't expect it from [someone like Vaughan]. I know he makes a living out of making those sorts of comments, but I thought he was out of line.

"Everything said about Steve Smith is absolutely ludicrous. We have a laugh that he's a bit quirky and different and he certainly consciously wasn't trying to do anything wrong and was just standing there thinking about batting.

"He's 100 per cent innocent in this, he didn't do anything on the pitch. The wicket at the SCG was like concrete, he would've needed 15-inch spikes to do what people were accusing him of doing and messing up Pant's guard.

"Give me a break, I've never heard such rubbish in my life."