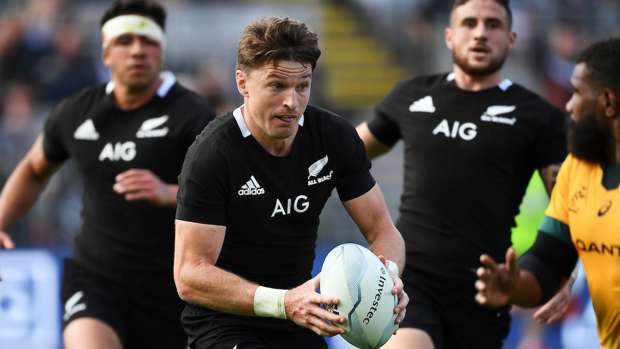 Beauden Barrett has revealed his positional preference and how he'd ideally like to operate within the All Blacks next year.

Although making his name in the No 10 jersey, Barrett has only started at the playmaker position for the All Blacks once in the past 14 months, with Richie Mo'unga the preferred choice.

Speaking to the Country Sport Breakfast, Barrett opened up about the challenges of moving into fullback.

"I do take a lot of pride in my prep throughout the week and I do feel that with the number of trainings we have, it's usually enough to get everything right for the weekend no matter what position I'm in, however, I do feel that preparing at 10 and then pushing out to 15 for the latter part of the game is easier mentally rather than going the other way around," he said.

"You just feel a little bit more involved running the game and you're close to the core and the heart of the team being at 10 versus being at the back at 15 and then coming in to control the game later on."

The All Blacks will be hoping a 38-0 win over Argentina at the weekend is enough to secure them the Tri Nations after earlier back-to-back losses.

Admitting the season hasn't played out quite how they'd hoped, Barrett said they'll build on it for next year.

"When we look back and we've hopefully won the Tri Nations and locked up the [Bledisloe Cup] we'll probably take that," he said. "We've learnt a lot over the past few weeks and we'd be foolish not to take that into next year.

"It is a new group, new management group, and a new crop of young blokes coming through so as leaders we're pretty determined to kick on from this [and] learn from it."

Meanwhile, Barrett is on his way to Tokyo with his family for a sabbatical with Japanese rugby club Suntory Sungoliath on an estimated $1.5 million deal.

The tournament kicks off on January 16, giving Barrett a month and a half to relax in quarantine and with family before his first competitive run out on Japanese soil.

"I'm excited to go up there with my young family and experience a culture that I love," Barrett added. "The Japanese people are special, the way they do things is unique ... got to get the balance right but I'll go up there and have some fun, play some good footy and I want to come back feeling fresh and ready to go."