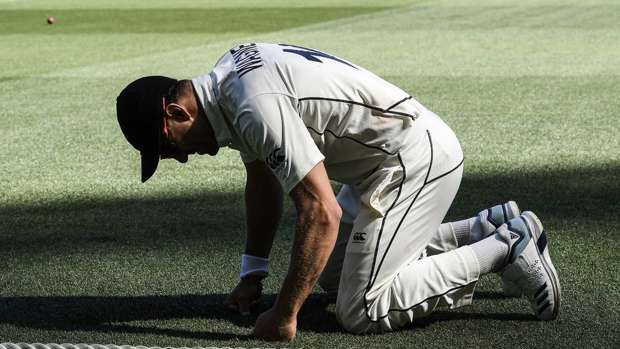 The hero of the Black Caps' first test victory over Pakistan has opened up about the experience of playing through the pain of two broken toes.

Neil Wagner broke the toes while batting during New Zealand's first innings, which opened the test match, meaning he bowled all 49 overs in the match while fighting the pain of those breaks.

Both captains involved in the game, Kane Williamson and Mohammad Rizwan, expressed their wonder at Wagner's exploits with the ball - which netted him figures of 4-105 - while his coaching team were similarly impressed.

However, Wagner himself has till now remained silent on the harrowing experience of waking in pain and doubting whether he could play for his country.

"On the last day I couldn't walk getting out of bed," he told TVNZ's 1 News.

"I sort of fell to the ground quite frustrated and quite angry, and just wanted to get out there and play.

"And as I tried to walk, the pain got worse and worse, and I got the frozen veges out of the fridge and a couple of icebags and tried to ice it a couple of times."

However, nothing Wagner could do himself could take away that pain and he eventually subjected himself to the trainer and rounds of pain-killing injections.

"About the 12th injection on the day, I started screaming and squealing a bit and biting on the towel," he says.

"The injections helped for about two hours then you got to try and bite your teeth, grit and go through it."

While plenty of other players in his situation would have called it quits at that stage, Wagner pressed on. He is a test match specialist, not appearing in shorter forms of the game for New Zealand - despite recording statistics comparable to team regulars - meaning these matches mean more to him than most in the squad.

"The burning desire to help the team is just there, you know, and it sort of gets you through it."

That motivation to play for his teammates and country is evident, but his thirst for wickets is equally as powerful and has resulted in him now being New Zealand's top ranked bowler - appearing at number three on the latest world rankings.

"Just get one wicket," Wagner laughs.

Instead, he took four, taking his career total to 219 at an average (26.32) bettered only by Sir Richard Hadlee amongst those who have surpassed 200 wickets.

While it is expected to take six weeks for his toes to heal, Wagner's role with the Black Caps looks to be over for the summer with no further test matches set to take place - a fact that pains the passionate cricketer.