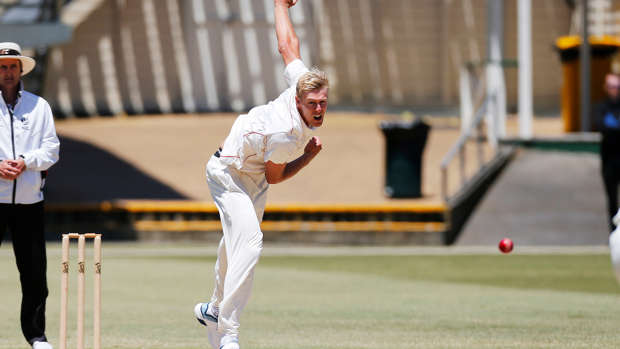 Auckland pace bowler Kyle Jamieson has earned his maiden call-up to the Black Cap as an injury replacement for Lockie Ferguson.

Ferguson is returning home from Australia after sustaining a grade two right calf-muscle tendon strain while bowling in the first Test in Perth.

The injury is expected to require four to six weeks of rehabilitation.

Coach Gary Stead confirmed 24-year-old Jamieson would join the Test squad in Melbourne in preparation for the second Test at the MCG on Boxing Day.

"It's an exciting opportunity for Kyle who has impressed in the Plunket Shield domestic four-day competition," Stead said.

"We've also been really encouraged by his progress in the NZC winter camps and his performances for New Zealand A.

"Standing at over two metres tall he obviously gets good bounce and brings something different to our other pace bowlers.

"He'll play for the Aces today in their Super Smash T20 match against the Kings, before making his way to Melbourne on Wednesday.

"It will be his first time in camp and we're looking forward to welcoming him into the Black Caps environment."

Jamieson boasts 72 wickets in the Plunket Shield at an average of 27.9.

Ferguson will travel home on Tuesday and Stead said the whole team was feeling for him.

"We're all absolutely gutted for Lockie," he added.

"He'd worked really hard to earn his Test debut and to have it cruelly halted by injury was truly unlucky.

"He'll return home to begin his recovery with an eye to India's tour of New Zealand starting in late January."

11 things about new Black Cap Kyle Jamieson
1) Jamieson was in the Auckland Grammar first XI for three years playing as an opener or at number three. He moved to Christchurch on a Lincoln University scholarship, studying for a Bachelor of Commerce.

Or to put it another way, he's about the same height as All Black lock Brodie Retallick.

If he makes the New Zealand team, Jamieson will be in a group of players rated the tallest in international cricket behind the 2.19 Mohammad Irfan of Pakistan.

Two fine former fast bowlers, West Indian great Joel Garner, and Aussie Bruce Reid, are among those about the same height as Jamieson.

3) Jamieson has serious form...with the bat. Batting at number eight, he scored a 110-ball century against England in Hamilton during an unofficial game last year.

England may not have done much homework on him. His highest first-class score at that point was 40, and his average 14.

His onslaught led to a bit of a spat with a frustrated England bowling star James Anderson, although fellow paceman Mark Wood was very complimentary.

4) His first-class debut for Canterbury against Wellington in 2014, when he failed to take a wicket in 30-odd overs and scored a duck.

5) Jamieson comes from cricketing stock - his dad Michael was a premier batsman for Papatoetoe.

who tweeted "An impressive bowler who at 6ft 8in can swing it....another one to add to the Black Caps stable".

7) Black Caps star Tim Southee played against him a few years ago and said: "He's got something different to everyone else in first-class cricket, obviously his height and there's not many of those guys going around in the world, so he's got an added advantage there and hopefully of his major injuries are behind him."

8) He was in the New Zealand team for the 2014 under-19 World Cup. He also made the New Zealand A side — which included test specialists BJ Watling, Jeet Raval, and Neil Wagner — who played against a Pakistan combo in Dubai late last year.

9) Injuries have been an issue, including two years ago when he broke a foot bone while jogging after a ball in training. He was among the top wicket-takers in the Plunket Shield at the time. He had previously suffered an ankle stress fracture.

10) There was no over-celebrating his 6-7 T20 stunner earlier this year.

"But it's a pretty cool thing, something I'll be able to look back on in the days and weeks to come."

11) Jamieson's entry into top-class cricket was guided by Gary Stead, the Canterbury coach who is now in charge of the New Zealand side.

Stead described Jamieson's action as "uncomplicated" and was immediately impressed with his professional attitude and desire to learn.