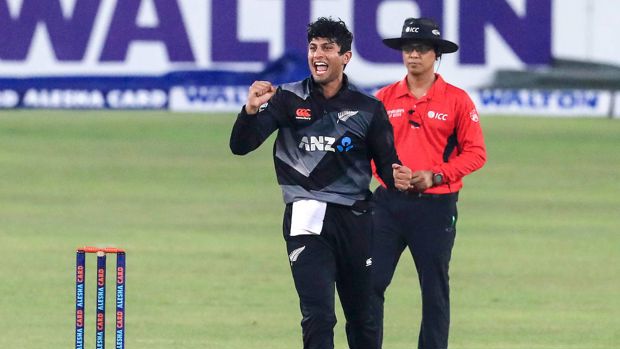 How things can change in just three games.

After an embarrassing first-up capitulation and the last-ball loss that followed, the Black Caps have gone full circle to spin their way to a crunching 52-run win in their third Twenty20 against Bangladesh, and stay alive in the five-match series.

A rapid adaption to the conditions in Dhaka has caused the drastic turnaround, and after the bowlers showed promise in the first two clashes on the slow spinning wickets, this time the batsmen and the fielders backed them up in a display that earned Rachin Ravindra and Cole McConchie their first international victories.

They were key contributors to the win as well, with Ravindra hitting 20 before taking a miserly 1-13 from his four overs, while McConchie returned his best T20 figures in his professional career with 3-15.

Add in the star turn of Ajaz Patel, with 4-16, and the Black Caps ripped through Bangladesh for 76, a statement performance from a second-string team against a full-strength Bangladeshi side in their home conditions, and a result that continues a terrific turnaround.

Playing on the same pitch that saw them routed for 60 in the opener, the Black Caps batsmen showed sharper skills to compile a total that looked maybe a touch below par, but still competitive.

Coach Glenn Pocknall made the correct call by bringing in explosive opener Finn Allen at the expense of one of the many seamers in the squad, and after being 9-4 in the first match, in the third match the Black Caps had bashed 11 off the opening over.

Allen's innings only lasted 10 balls, but he still showcased the immense promise he has as New Zealand's long-term opener in his breezy 15, while Ravindra and Will Young (both hitting 20 at a run-a-ball) managed to provide the Black Caps with their first platform of the tour.

It nearly went to waste. Colin de Grandhomme and Tom Latham both departed cheaply, before Henry Nicholls and Tom Blundell attempted a dangerous rebuild, with the Black Caps going 45 balls between boundaries as they creaked to 88-5 with just four overs remaining.

It was a mighty risk – with the big-hitting talents of McConchie and Scott Kuggeleijn still to come and more than capable of scoring quickly, it seemed a classic case of senior batsmen overestimating the importance of their wicket, and playing too conservatively.

Had things gone awry with Blundell on 12 off 19 balls, the game may have shifted, but Nicholls and Blundell managed to execute their plan to near-perfection, smashing 40 off the last four overs in a 66-run stand off 57 balls that dragged the Black Caps to a defendable total.

A loose start with the ball had Bangladesh well on their way at 23-0 after just 2.3 overs, but Liton Das was trapped lbw by McConchie, and from there it was remarkably one-way traffic.

Patel leaked seven runs from his first over but took two wickets in his second, including the prized scalp of Shakib Al Hasan, who took a wild slog off the second ball he saw and was caught at long-on.

Under fairly limited run-rate pressure, some of the early Bangladeshi batting was a bit baffling, but unlike in the second T20, this time the fielders didn't let the bowlers down, and made the hosts pay.

Nicholls took two sharp low catches inside the circle, one of them to remove Mahmudullah as Patel took two wickets in two balls, reducing Bangladesh to 44-6 after 10 overs.

From there, the result was never in doubt, and perhaps the greatest sign of New Zealand's all-around improvements came from Blundell, who made amends for his Friday fielding foibles with a superb tumbling catch in the deep, as the Black Caps cruised to a victory that has reignited the series.