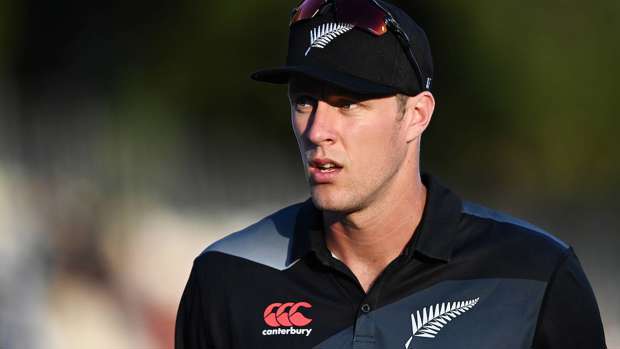 After a weekend in the spotlight, Six Million Dollar Men Kyle Jamieson and Jhye Richardson will go head-to-head under a different set of lights when New Zealand and Australia resume their Twenty20 rivalry at Hagley Oval tonight.

It will be the first international under lights at Hagley Oval where Jamieson and Richardson will feature in a fast bowling duel sure to engage fans who will want to see for themselves why two Indian Premier League franchises plonked down close to $3m apiece for the two rising stars with only 13 T20 internationals between them.

Jamieson drew a bid of $2.7m from the Bangalore Royal Challengers last week, while the Punjab Kings paid $2.7m for Richardson.

For Richardson, 24, it will be his first international appearance in almost a year and just his second since dislocating his shoulder in early 2019. He's played only nine T20 internationals but he's been the leading wicket-taker in the BBL. Jamieson, 26, has played only four T20Is so far in his meteoric career.

The match will be just the 10th T20 between the two rivals, with Australia holding a 7-2 advantage.

If anything, New Zealand go in with a stronger team on paper. Only quick bowler Lockie Ferguson is missing after Martin Guptill passed a fitness test having been given a vote of confidence by the selectors after a run-poor season.

"It's a very settled and experienced side and we're going to have to be at our best to win," admitted Australian captain Aaron Finch.

"Whatever Australian team is put out is strong. They do have the majority of their consistent T20 side there with also the opportunity of bringing in a lot of talented youngsters. The depth of Australian cricket is always noted and a large number of their newer-look players do have experience playing in other competitions around the world. They are very strong."

Another factor against Australia is the fact they were in quarantine right up until the match eve. But Williamson thought that could be a spur, especially as they will walk out on to sold-out Hagley Oval.

"When you go through a quarantine, which is a quick reminder of the world we live in, teams look forward to being out there and playing cricket again.

"We're fortunate in New Zealand that we can have crowds and live a relatively normal lifestyle and I'm sure the Australian guys are looking forward to playing in front of a sold-out crowd."