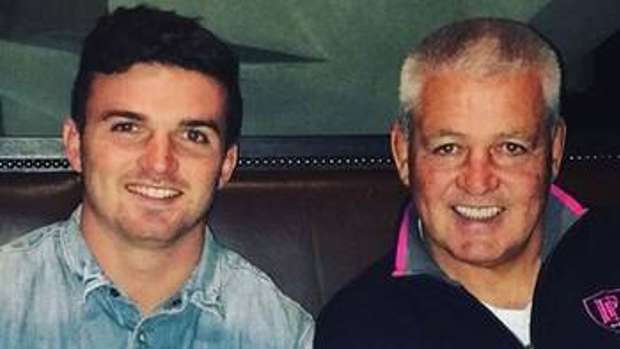 The Highlanders first-five kicked a last-minute drop goal to secure a dramatic win against the much fancied Chiefs in Dunedin last night and, incredibly, foretold the series of events at dinner with his dad, Chiefs coach Warren Gatland, at dinner earlier in the week.

Gatland only earned himself a spot on the Highlanders bench for the Super Rugby Aotearoa opener due to an injury to Josh Ioane. He discovered the news on Thursday but had kept it from his father, until he had dinner with his parents that night.

It was a bit of a different situation for me really," laughed Bryn after the match.

"I found out on Thursday and then had dinner last night with him and mum.

"Halfway through dinner he got a text and he looked at me and said: 'Are you on the bench tomorrow?'

"I didn't want to give the gameplan away!"

After the match, Warren Gatland snr gave his perspective on the dinner.

I said OK. He wasn't going to tell me, which was good.

"And then we had a joke, and he said, 'I've got a feeling I'm going to come on and kick the winning drop goal'.

"And it ended up happening. I just went and saw him afterwards.

"I'm not happy about the result, but he showed a bit of calmness there, and he's done that in the past and won games in clutch moments.

"Unfortunately we gave him that opportunity and in fairness he was able to step up to the plate and deliver for them."

The 25-year-old's efforts in the 79th minute was met with a raucous reception under the roof of Forsyth Barr Stadium, and pundits on Twitter joined in on the jubilation – and dejection – as the hosts rejoiced following a tensely-fought battle.

Imagine being Bryn Gatland - you’ve disappointed the Prime Minister and your Dad.

Bryn Gatland scored the drop goal to beat the Warren Gatland coached Chiefs.
In unrelated news Bryn is now out of Warren's will.

Sure Bryn Gatland’s performance was great but how about these 2 blokes behind him on the beers during the post match interview? pic.twitter.com/DyBsDJHT1x

It was Gatland's first game in 13 months after injuring his foot against the Sunwolves in Tokyo last year, and he tried to play down his heroics.

"Often those things come pretty late in the game, so once we got behind on the scoreboard by a drop goal margin, the plan was to get the ball back and get into an area where you win a penalty or land a drop goal," he said.

"It just happened to fall on our side.

"It was a wee but wonky, a wee bit left to right and I was pretty lucky to get that over, and I was just happy to get on the field.

"The credit goes to the team on how they performed."

For all the late drama, rugby's return in the deep south after a three-month shutdown due to the coronavirus pandemic was not an immediate success from a spectacle perspective as both teams grappled to come to grips with the referee's new focus on the breakdown.

Tonight at least, the Highlanders won't complain after their campaign got off to the perfect start. In the end, having scored three tries to two and enjoying the better of the contest, they fully deserved their win after also surviving two yellow cards.