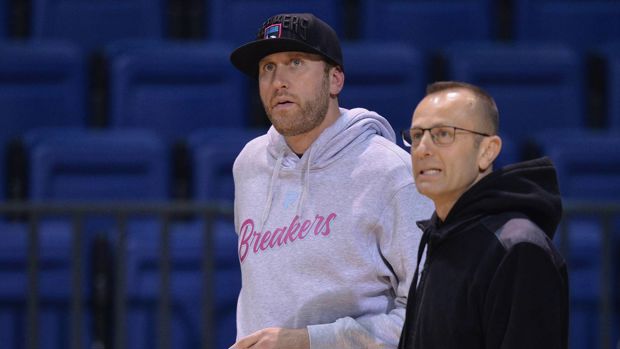 The Breakers' outbreak has risen to nine cases with Walsh confirming both he and coach Dan Shamir had tested positive along with two unidentified members of the 14-man playing group.

With captain Tom Abercrombie also on the sidelines through injury, the Breakers are in danger of being seriously under-manned when their campaign is scheduled to tip off against South East Melbourne Phoenix on Saturday.

"That's in the NBL's hands. Hopefully we get a reprieve and our first game will be on December 10 and we can prepare properly."

With Shamir and the affected players confined to their apartment rooms for at least the next few days, Walsh said a postponement was necessary to give the group time to leave isolation and attempt to get back up to speed on the practice court.

"The one thing about the players returning to form, it's very clear that once you have Covid, whether you're symptomatic or asymptomatic, you can't do anything for 10 days," he said. "As a high-level athlete, that almost takes you back to square one, especially if you're really sick."

Walsh said he was the ninth case in the Breakers' 39-person travelling party - all of whom had been double-vaccinated - and those infected had spanned a full range of severity, with some barely showing symptoms and one person being hospitalised for observation.

But he was confident the spread had now been calmed, the first step necessary before any discussions with the Australian NBL about scheduling would take place.

"I don't envy the side of the league, either," Walsh said. "From their perspective, I'm sure it's tough to set a precedent that if you have a couple players and a couple staff members test positive then you cancel games. Because this won't be the last positive case throughout the year."

Indeed, the Illawarra Hawks are also battling a potential outbreak, after their pre-season game against Sydney last night was cancelled due to a positive case.

"I think it will be the same precedent - if they're forced to go on then we will be too," Walsh said. "We're going to put forward that due to the fact we've had to relocate for two years now, and due to the fact that we'd like to go into the season with a competitive balance, we feel the game should be postponed."