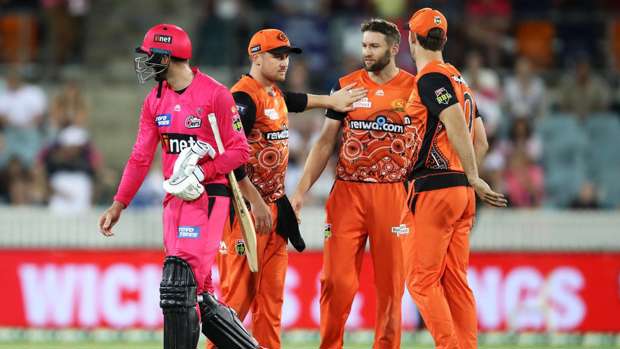 The cricket world has come down hard on Perth Scorchers bowler Andrew Tye after he bowled a wide to finish the BBL Qualifier — and cost the Sydney Sixers' James Vince a chance at bringing up a century.

The Scorchers were never really in the same game, despite hitting 6/167, as the Sixers reached the total one wicket down and with three overs remaining.

Englishman Vince had led the way and was on 98, just short of the Sixers first ever century as a franchise.

But the game has ended in a wild anticlimax after the first ball of the 18th over from Tye sailed way over Vince's head.

The @sixersBBL win in the WORST FASHION POSSIBLE 😫 #BBL10 pic.twitter.com/5uiupeUryf

In the previous over, Vince was on 98 with five runs needed when Daniel Hughes hit a four to square leg leaving just one run needed.

The crowd booed the Sixers star, while Hughes then blocked and looked to run the next ball.

It was crazy scenes as the fans cheered the last three balls as Hughes blocked them out.

In commentary, Adam Gilchrist said: "What about a wide, how nasty could (Jhye) Richardson be here?"