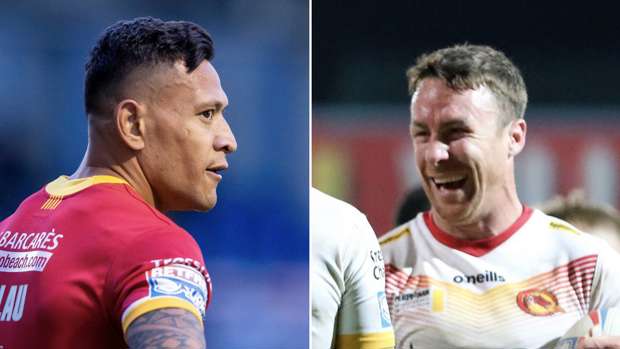 Following a turbulent week where Folau was linked with a return to the NRL with the Dragons, the club pulled the rug out from under him when they backflipped just 24 hours after first confessing they were interested in the former Wallabies fullback.

The club's board of directors were reportedly forced to pull a U-turn after a tsunami of outrage followed their pursuit of the 31-year-old.

News reports of Folau's desire to return to Australia, despite remaining contracted with Catalans until the end of 2021, have flooded Australia this week.

But none of those stories will raise eyebrows like the tale of star playmaker Maloney's warm welcome for the triple code-hopper.

When Folau signed with Catalans 12 months ago, he reportedly got more than he bargained for when he joined the players' private WhatsApp group.

"And Jimmy Maloney, god help him, couldn't help himself and just started bombarding him with gay pornography. And then he gave up."

Folau didn't appear to be too affronted by the cheeky hazing — signing a one-year contract extension with the French club in June.

Maloney said this week Folau would actually be a smart signing for any NRL team, despite the fact Folau hasn't played in the NRL since he left the Broncos in 2010.

The former NSW State of Origin star even revealed Folau informed his teammates through the same WhatsApp group that he was exploring options for walking out on the team and returning to Australia.

"I think he would be good for the game, and you want the best players playing in the competition. He'd only make the NRL better," he said.

"All the boys got along with him here, and when he told us why he wasn't coming back we all understood."

Folau's return to the NRL now appears to be dead in the water, but he is reportedly eager to explore other opportunities in the league, according to NewsCorp.

He hasn't played in the NRL since leaving the Broncos in 2010 and in 2019 had his contract with Rugby Australia torn up for making homophobic comments on social media, bringing an end to his illustrious Wallabies career.

"The game is inclusive. Israel's comments are not inclusive," V'landys said in October 2019.

"When I was a kid and kids used to get bashed up because they were different, I used to go and defend them. And a lot of them, it's because their role models or their peers made them that way.

"I have no tolerance for people that put other people's lives (at risk) or (who commit) violence. It's a big statement to make. With due respect to Israel, what he says, young kids listen to. He is a role model. They act on it. And when you're a kid at school and you get bashed up because you're different, I don't think that's a good thing."