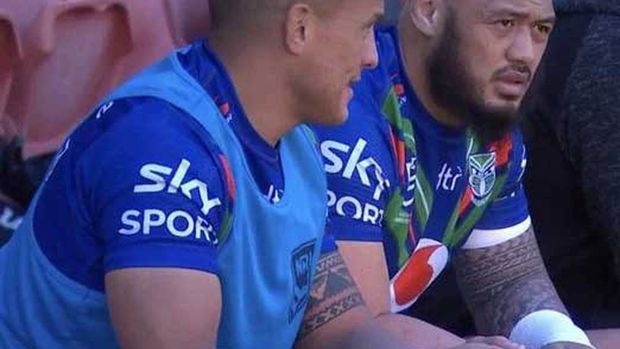 Warriors head coach Nathan Brown has addressed the crude message Kane Evans wore on his wrist tape at the weekend, saying it was a "silly" decision from the prop.

Evans, who was the Warriors' 18th man in their loss to the Penrith Panthers on Sunday, had "fold some c***" written on his wrist tape, which was clearly visible as he was shown on the broadcast.

While the 18th man can only be called upon if a teammate is injured as a result of foul play or if a team has three failed head injury assessments, Evans got more face time on the broadcast than likely anticipated after the Warriors lost four players to injury in the first half.

While none of those were due to foul play and only one was a failed HIA, Evans was not able to be used despite the Warriors having no one available on the bench for the entire second half.

Speaking to the message on Evans' wrist, Brown told Newstalk ZB's Elliott Smith the club did not condone the decision.

"I think there's two things important to understand," Brown said. "Kane Evans is a really good guy, a very good club man and a terrific fella, but sometimes good people do things that are a little silly.

"Certainly, what Kane's done on this occasion is silly and we as a club don't condone it. I'm sure there will be some sort of sanction from the NRL, and I think it's important to understand that what he did is wrong.

The expletive came under scrutiny from the NRL, who had previously cracked down on players with swear words or controversial messages on their wrist strapping. Evans was fined $5000 for the gaffe.

In 2014, Evans' current Warriors teammate Matt Lodge was suspended for two matches for writing the word "c**t" on his wrist tape during an under-20s State of Origin game.

And in 2016, Andrew Fifita was fined $20,000 for sporting a message of support for convicted one-punch killer Kieran Loveridge on his wrist.