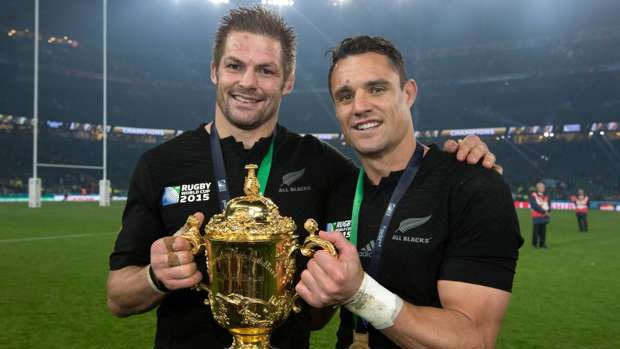 Former All Blacks superstar Dan Carter has added yet another layer of legend to the already renowned reputation of Richie McCaw, revealing just how much pain his former captain endured to win a World Cup.

Carter, speaking to French rugby newspaper Midi Olympique about a range of topics, reflected on his time playing with McCaw and the 2011 season in which the All Blacks were attempting to break a 24-year drought when it came to holding the Webb Ellis Cup.

While Carter was famously ruled out of the tournament with a groin injury, he witnessed the extent of McCaw's toughness as he battled his own ill-health to help satisfy the desire of New Zealand rugby fans for a title on home soil.

In January of 2011, McCaw injured his foot during a training session for the Crusaders Super Rugby side. A week later he announced that he would miss the first six weeks of the season and receive invasive surgery that saw a screw inserted into his ailing hoof.

The foot never healed properly and the screw ended up causing more harm than good. By the time that became obvious, McCaw was left with the decision to either play through some serious pain and risk doing long-term damage, or miss the World Cup and a shot at redemption. We all know which choice he made.

However, it set up a situation that left his teammates feeling both awestruck and, by the sounds of it, a little squeamish.

"During this period, he completely forgot about the pain. Except after the games when he couldn't walk for three days. He was seen covered in sores and bruises, limping through the weekend. Then came the game and he would do the same again," Carter said.

"We wondered how he did it, but it inspired us all. He played and won a quarterfinal, a semifinal and a World Cup final with a broken foot. He wasn't training for those three weeks. He just walked the week, and put the pain aside for games."

While it was public knowledge at the time that McCaw had a nagging injury, he himself played down its severity in typically understated style.

"'Nah, I'll be fine,' I keep telling anyone who'll listen, media, team-mates, coaches, myself. 'Just can't train because it'll get a bit sore, but I'm ready to go. I'm good to go.' And I am. I believe it," wrote McCaw in his own book The Open Side about that campaign.

As it turned out, McCaw was fine. He not only led the All Blacks to a World Cup win in 2011, but to another in 2015 and went on to become the most-capped All Black of all time. Now that's how to play through the pain.