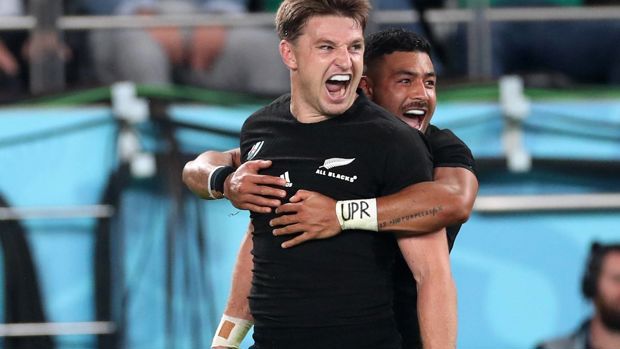 With Mo'unga opting to stay in New Zealand for the birth of his child, Barrett has been handed an opportunity to start at No 10 for the All Blacks, having previously sat on the bench due to his sabbatical in Japan and Mo'unga's form in the position this year.

It is an opportunity Barrett took with both hands on Sunday, producing perhaps his best performance for the All Blacks this year in the 39-0 thrashing of the Pumas.

However, with Mo'unga beginning his stint in managed isolation on Tuesday as he returns to the All Blacks squad, head coach Ian Foster will soon, once again, be left with a conundrum of who to start at No 10.

Speaking on Sky Sport's Breakdown, Kirwan said Barrett, who was nursing a minor niggle and missed three kicks against the Pumas before handing kicking duties to younger brother Jordie, may need to work on that area of his game if he wants to challenge Mo'unga for the starting spot.

"The interesting thing for me about Beauden Barrett, will this selection come down to kicking? Is that his only worry at the moment?" Kirwan said.

"When you talk about Mo'unga, he's X-factor, but so is Barrett. They're very different styles of play, but they both have the ability to change a game."

Kirwan praised Barrett's performance over the weekend, in particular his spectacular one-handed flick pass to set up Luke Jacobson for a try.

"That seeing a gap and just accelerating through it, which is a lot harder than it looks, because those gaps close pretty quick, and then that out-the-back hand.

"Mo'unga does the stepping stuff, so I think Beauden will be out kicking as much as he can, because that's what it will come down to when Mo'unga does turn up."

Former All Black Mils Muliaina added similar sentiments and said patience is needed with Barrett as he slowly readjusts to test footy after his stint in Japan's Top League.

"It's just a continuation of him coming back into the environment, he's still a little bit tight and sore," Muliaina said.

"You've got to realise how big a step that is. Coming from Japan, and then getting yourself into the All Black environment, finding his feet, getting used to the intensity of not just the trainings, but also the match, getting up to that mental state when you're preparing week in, week out.

"When you're looking from Beauden Barrett's point of view he's just starting to get into the flow of things in terms of his game. But that try he set up, that magical pass is just out and out class."

Barrett said after the Pumas clash that he was still "struggling" with a minor calf injury, but shrugged it off as due to "old age".

He was replaced by Damian McKenzie with 30 minutes to go in the clash to not risk further aggravating the calf niggle in a match where the scoreline was so lopsided.

Mo'unga is due to return to the squad for the All Blacks' last Rugby Championship clash against the Springboks.

The All Blacks take on Argentina in a rematch on Saturday at 10.05pm.