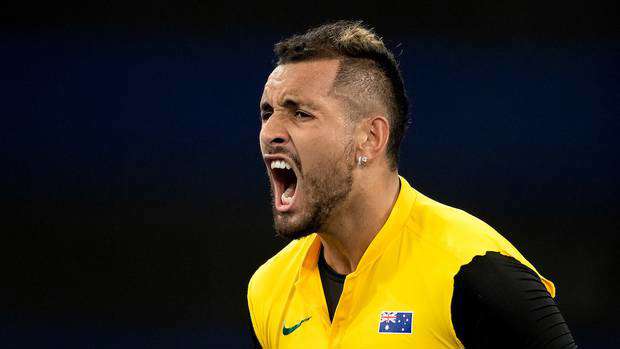 Nick Kyrgios says tennis coaches get paid too much, and he's too set in his ways to ever need one anyway.

And in line with his status as a modern sports anti-hero, the outspoken Aussie has told a podcaster that winning grand slams is not his goal.

Kyrgios, ranked 40 in the world, also wishes he had played in a bygone era when the game had more characters.

The gifted Kyrgios polarises opinion around the world. But at his best he is an artist on the court, with an outlandish personality which attracts a lot of fans.

Kyrgios implied he would feel bad about putting a fulltime coach through the ringer.

"I think I should've played when (John) McEnroe and all of them were playing. The personalities now – I don't mesh with them," the 25-year-old told his friend Elliot Loney in the 45-minute interview.

Kyrgios added: "I think (hiring a coach) is a little bit of a waste of money 'cause I think they get paid way too much.

"And for me I don't have a goal of winning grand slams. I just want to do it my way, have fun with it and just play.

"So to get a coach for me is pointless because I don't want to waste their time almost.

"I just don't think a coach is ready – and I'm not going to put them through it too 'cause it would just be a nightmare.

"Where I'm at my career now, it's just too far gone, I think for a coach. I'm too set in my ways. I just don't like to listen to advice, to be honest."

Kyrgios has made two Grand Slam quarter-finals but doubts he will ever win one.

"I don't believe my body will hold up for seven matches potentially playing three to four hours (in each match)," he said.

And his attitude to the game is in marked contrast to the standard professional expectations.

"If I could, I'd just be on the beers every time I play – afterwards. I want to chill out. I think sport's taken a bit too seriously."

Kyrgios described himself as a "fat kid form Canberra" with decent ball striking ability. He was constantly told he needed to lose weight if he wanted to make it in tennis.

It was tough to handle back then. I just wanted to prove a lot of people wrong."