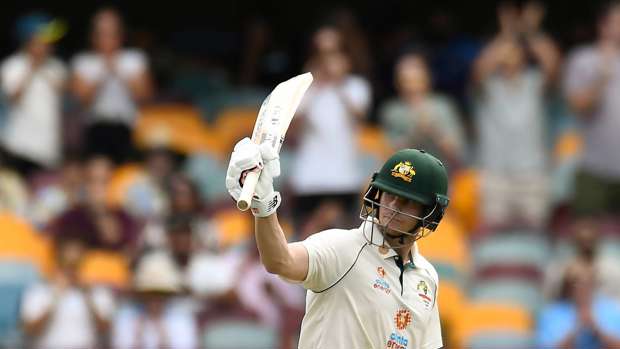 Former Australia skipper Steve Smith has voiced his desire to lead the national side again, but only if Cricket Australia wants him in the job.

The 31-year-old held the role for three years before being stripped of his honours following the infamous sandpaper incident against South Africa in Cape Town in 2018.

Since serving the 12-month suspension which ended in 2019, Smith has returned to the higher echelon of Australian cricket and re-established himself as a mainstay in test and limited over sides.

Currently Tim Paine serves as the team's skipper in test and one-day cricket, with Aaron Finch acting as mentor in the 20-over format.

owever, Paine in particular has been put under the spotlight following poor showings from his side under his leadership, highlighted by a dismal showing in their five-match test home series loss to India over the 2020-21 summer.

Smith told News Crop Australia he is keen to don the captain's armband again, having been non-committal up until this point.

"I've certainly had a lot of time to think about it and I guess now I've got to a point where if the opportunity did come up again I would be keen," Smith says.

"If it was what Cricket Australia wanted and it was what was best for the team at the time, it's certainly something I would be interested in now, that's for sure.

"I haven't always felt like I wanted to do it again. That's only come in the last little bit."

The infamous ball-tampering moment occurred a little over three years ago and saw Australia lose two of its top players in Smith and opening batsman David Warner for 12 months, while wicketkeeper Cameron Bancroft was banned for nine months.

Smith's expulsion as captain carried a period of two years before he could be considered again.

"I'm always going to have to live with Cape Town regardless of whether I lead again or not. It's always there," he says.

"I've been through all that now. Time keeps moving forward, and I've learnt so much the last few years about myself and grown as a human being.

"I feel as though I'd be in a better place if the opportunity did come up. If it doesn't, that's fine as well and I'd support whoever is in charge the same way I've supported Tim and Finchy."

Vice-captain and the ICC's top ranked test bowler Pat Cummins has been trialled as skipper in the New South Wales domestic side, and was tabled as a possible successor to Paine. However such a move was recently criticised by Smith, who noted it's tough for fast-bowlers to be captains.

Currently, Australia has little cricket scheduled until next summer when they welcome an Ashes series and a ground-breaking test against Afghanistan.

There are planned white ball tours of the West Indies and Bangladesh prior to their Twenty20 World Cup campaign in India later this year.