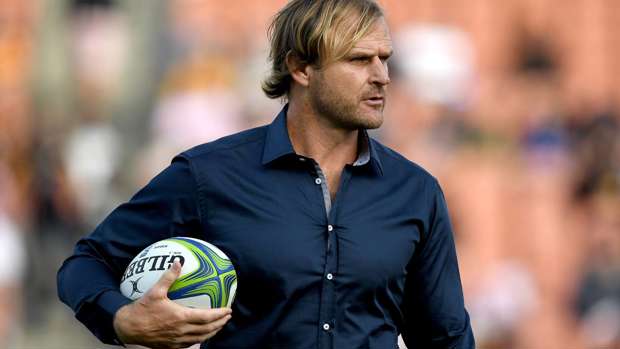 Crusaders coach Scott Robertson has made himself clear on where he stands in discussions of re-signing with New Zealand Rugby, amid talk of other nations having him in their sights.

Robertson, who is open about his ambitions to coach at the highest level, has been linked to several coaching roles overseas, most recently as a potential successor to Eddie Jones at the helm of the English squad.

The 46-year-old is off contract with NZR at the end of the year and, in discussions with the organisation about the future, Robertson and his agent Warren Alcock wanted some answers around both career opportunities as well as whether or not the Silver Lake deal will go ahead.

"Like I've said before, with the agent, he's a pretty patient type, it's a long game for him just around what's happening with New Zealand Rugby, just making sure the timing is right."

NZR is in the process of working towards a $465m deal with the American technology investment company that would see them sell a 15 per cent stake in their commercial rights to Silver Lake. While the New Zealand Rugby Players' Association has come out in opposition of the sale, NZR chief executive Mark Robinson was confident a "transformational" deal would get the backing of key stakeholders.

When pressed on exactly why the Silver Lake deal added to calculations, Robertson said: "Just see what it (the deal) means, if it is or isn't [accepted], and what does it look like on the side of that with the next All Blacks role coming up."

Although Robertson missed out on the All Blacks head coaching role in late 2019 to Ian Foster, many have tipped him as an All Blacks coach of the future. However, now in his fifth year as the head coach of Crusaders and with four Super Rugby titles in as many campaigns at the helm of the team, Robertson is wary of making the right decision for his family and his career.

"It's pretty clear; if I sign a couple more years, I'll have done the Crusaders for seven years - which I love doing - but what does it mean for the next step after that? How does that line up around the 2023 World Cup if this coaching group stays on? So, there's a lot of things going on; a lot of answers to come back.

"I've been really patient here. I've been coming down to Rugby Park since 2008 in some role as a coach. We've got a great lifestyle, but I'm also ambitious career coach.

"So, for me to have the opportunity, if it's here or elsewhere, you always keep looking at those opportunities."

Robertson has already received a glowing reference from Sir Clive Woodward in relation to the top job in England, should it become available.

The former English captain told Newstalk ZB's Martin Devlin that he would love to play for Robertson.

"This guy Robertson I don't know, but crikey I just get a really good feeling about him," he said.

"Clearly, he's a winner, he's successful, he's very good with people. Would I like to play for him? Yes, without even knowing him, just from seeing the way his team plays.

"That would be really interesting on so many fronts."