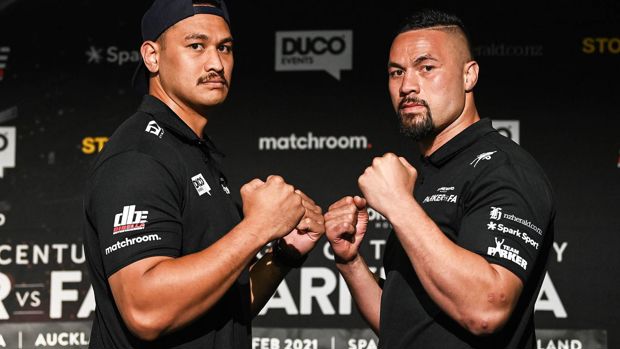 Mike Tyson once declared that he wanted to eat Lennox Lewis' children.

Contrast that to the lead-up to the biggest New Zealand heavyweight clash in history, where Junior Fa's "celebrity" trainer Eugene Bareman urged the public and press "not to overlook the human side" of the upcoming fight.

It was an unusually poignant and slightly jarring moment for a pre-fight press call that usually provides a platform for the kind of cheap verbal shots that sell per-per-view packages.

Instead what was delivered when Joseph Parker and Junior Fa, plus trainers and managers, met at the top table was an exercise in restraint and something approximating humility.

The fighters liked each other, they said. It would be all business in the ring but there would be no eating of children or ripping out of hearts. Nor did there need to be.

There was the odd sly dig, some more subtle than others, and the requisite declarations of impending victory, but none of that overshadowed the idea that this would be a landmark fight between two athletes with similar backgrounds who will attempt inflict injury and set back the professional careers of each other.

Parker is fighting with the aim of pushing himself towards another title tilt, a path promoter Eddie Hearn has mapped out. Fa is fighting to replace his fellow South Aucklander in that pecking order.

"Someone is going to have that dream shattered," said Bareman, who has found fame by guiding the MMA career of Israel Adesanya. "One of these guys is going to fade away a bit and do what fighters have to do to build themselves up again.

Unfortunately for Parker, Bareman concluded, he would be the one in need of human empathy after the weekend.

The fight is a bigger risk for Parker. That has been acknowledged by all sides. A loss to Fa would be "catastrophic" for his career says Hearn, while it is "make or break" according to his long-time trainer Kevin Barry.

"They are trying to raise an emotional response," Barry said of Fa's camp, "trying to get us to lose focus.

"We know this is very, very important for us. Is it make or break? Yes. If we don't deliver on Saturday night it's going to be very hard to get back in position to fight a top five, top 10 boxer let alone a title fight," he said.

Without devolving into word play, it is clear Parker feels that a risk is only a risk if it doesn't work. He's been here before and clearly feels confident. Asked what round he expected to end the fight in he began and ended his answer deliberately.

Any of those numbers would do. He went no further.

Barry pointed out that Parker had fought under the brightest of lights. His skills and, just importantly, his fortitude had been examined on the grandest of stages. The spotlight was where he was happiest.

Fa and his trainer Doug Viney had done well to forge an unbeaten professional record over four years, Barry continued, but that was all he had on his resume. He had no experience of the Big Show, the atmosphere he would face when he entered the ring in front of cameras that would beam moving images of his struggle into homes across more than 180 countries.

Forget the red herrings about biased judges and arcane glove protocols, the fight would be decided by who handled the pressure better and Barry believes the man in his corner had a profound advantage.

How would Bareman respond?

"You can't really argue with anything Kevin said," he said.

It was time, though, for Fa to go where Parker has already been.

"Every fighter reaches a level when they have to announce themselves to the world."

Parker, with all due respect, has a different idea.