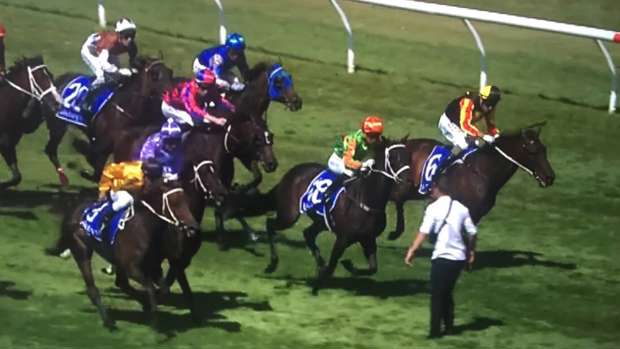 A huge Wellington Cup crowd was left stunned as a member of the public ran onto the track into a field of charging horses at Trentham today.

Remarkably nobody was injured in the incident that saw jockeys dodging the foolish track intruder at full speed 150m from the end of race eight.

The intruder was arrested by police and taken from the track, with the disruption to the race seeing one of the horses declared a non-starter.

Incredible vision at Trentham. Jockeys should be congratulated for the feat on not cleaning up the person standing on the track ! pic.twitter.com/cSHs4s1Fmd

Jockeys were left trying to avoid the male offender as he stood in the middle of the track as the field fanned directly in front of the main grandstand.

"He was lucky he didn't get run over," said champion jockey Danielle Johnson.

"Most of us didn't see him until late."

Horrific scenes eat Trentham, this guy does not realise how much danger he is putting everyone in. pic.twitter.com/rOdMJqmA4p

With thoroughbreds weighing around 500kg and travelling faster than 60km/h in the closing stages of the race, had any of them made direct contact with the intruder the results could have been fatal - and all on live television being beamed around Australasia.

The incident comes three months after a golfer playing at the pitch and putt course inside Ellerslie racetrack accidentally wandered into the body of the field in the famous Great Northern Steeplechase.

No one was injured in the incident.