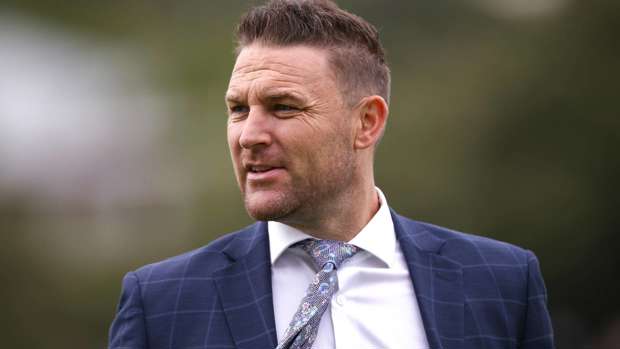 The first sign to see whether the 39-year-old's wisdom has paid off will come on Friday when the Black Caps face the West Indies in the first of three international Twenty20's at Eden Park.

But he won't be on the boundary to cheer the players on – McCullum will instead be calling the match as part of Spark Sport's commentary team.

However, he says it's great to be back mingling with familiar faces.

"It's been a while since I've been able to see their games up close, obviously I had Seif [Tim Seifert] and Lockie [Ferguson] over in the IPL.

"A bit of time in and around Kane [Williamson] and Trent [Boult] has been really really good, they're trending well."

Out of all the players McCullum will enjoy catching up with, few will have the first-hand experience Seifert does without actually playing alongside him. Seifert debuted for the Black Caps in 2018, two years after McCullum's final international match.

The pair have worked closely, and McCullum expects a big summer ahead for Seifert.

"He's in for a breakout season for the Black Caps," said McCullum.

"I think he's a special talent to be honest. Just seeing how quickly someone can improve and develop some skills, and his attitude and how much he wants it in this game is something to behold.

"His best days are certainly in front of him."

Three of Seifert's last five T20I appearances have delivered knocks of 30 or more, including two half centuries. His best sum was 84 against India in February 2019.

McCullum has also picked up on their eerily similar style of play.

"His game is very similar to mine… I think he's ahead of where I was as a batter at the same time, from a wicket-keeping point of view he's really improved in a short space of time," said McCullum.

"Funny story – he called me just after he missed out on the World Cup squad, and said he'd been a bit of a fan of mine throughout my career and he wanted to try and improve his game, and he asked if I would help him out.

"I've had the pleasure over the last six or nine months being able to help him out with his wicket keeping and also his batting."

Seifert also notes the huge benefit of working alongside McCullum, describing their sessions as "outstanding".

"To ask him things that will help my game and also, it's a lot easier working with someone when they're there instead of just over the phone," he says.

"We've been doing a bit of shadow keeping, he's been behind me."

McCullum coached Seifert in both Premier Leagues with the Trinbago Knight Riders, who won their fourth CPL title, and the Kolkata Knight Riders this year. He says in those teams he utilised Seifert as a "fluid" batsman up and down the order, but believes he is best placed at the top.

"He's got some skills and attributes that can be incredibly destructive," he adds.