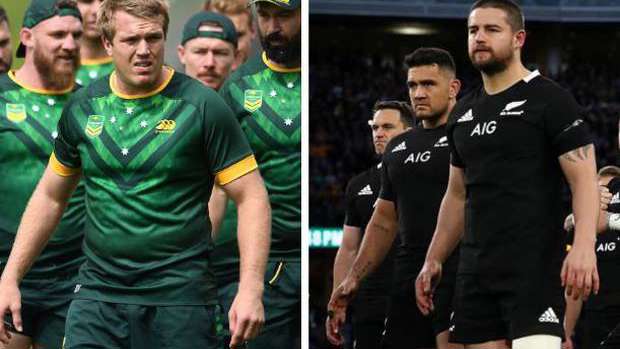 New Zealand Rugby boss Mark Robinson has confirmed the All Blacks are in talks to play the Kangaroos in a potentially lucrative cross-code clash later this year.

As it stands, the All Blacks are scheduled to play the Wallabies in a four-match Bledisloe Cup series, with the first test pencilled in for October 10 and likely to be staged in Wellington, but this situation remains fluid while borders remain closed.

During a wide-ranging conference call with media on Thursday, Robinson confirmed the Kangaroos match was also on the table.

"The concept of the All Blacks playing the Kangaroos later in the year, we must be very clear that our priority is we want the All Blacks to play international rugby for the remainder of the year and we've talked about the uncertainty associated with that," Robinson said.

"But absolutely we've had the option put to us of this hybrid game with the Kangaroos. It's one of many different scenarios in a unique year like this that we're considering, looking to be innovative and having a focus on trying to consider revenue-generating ideas at this time given then financial climate we're in."

Three years ago reports suggested the one-off match could generate each team $10 million.

"The last time New Zealand Rugby had an approach was in 2017 and at that stage for various reasons it wasn't taken any further. We're interested in learning more, as we are a whole range of things that are being put to us at the moment.

"We'll go through the proper process in terms of making a decision if we feel it's got merit to take it further."

New Zealand's professional rugby resumption has, meanwhile, allowed NZR to save 25 per cent of its workforce. During lockdown NZR expected to shed half its staff but Super Rugby Aotearoa's resumption, and the flood of crowds to the opening four matches over the past two weekends, has lifted the financial burden somewhat.

ZR is believed to have claimed $3.6 million for around 500 staff, which includes players, from the government wage subsidy scheme.

"We are farewelling 25 per cent of our staff," Robinson said. "It's fair to say that with rugby resuming the cuts to staff aren't as harsh as first feared but it's still incredibly hard to say a goodbye to people who have given a huge amount to the game within our organisation."

Robinson confirmed NZR is in talks with Rugby Australia about its bid to host the 2027 World Cup. If Australia is successful, New Zealand could potentially host one pool but Robinson is keen to somehow involve the Pacific Islands too.

"We've been talking to key representatives of Rugby Australia for at least the last 12 to 18 months around this possibility. This is something we're obviously interested in. No firm decisions have been made. More broadly we see this as an opportunity to be something where the Pacific might be involved.

"It would be a huge opportunity to bring the global event back to this part of the world and if New Zealand could be involved in any way it would be hugely exciting. Those conversations will be ongoing."

Other developments include the North versus South fixture which is scheduled for August 29 in Auckland, and with the Mitre 10 Cup draw announced Robinson said significant cuts to provincial players' wages had been agreed after fears teams, including North Harbour and Taranaki, would be forced to pull out due their inability to pay salaries.

Robinson said All Blacks would play for their provinces in the first three weeks of the Mitre 10 Cup. The Herald has been told provincial matches, such as Auckland at Eden Park, could be played as curtain raisers to the All Blacks.

"That's very close to being resolved," Robinson said of provincial players' wage cuts. "We're happy with where that has eventually got to and it's given greater certainty for the players, provincial unions and ourselves leading into Mitre 10 Cup so we can have all of the teams involved."

NZR's Aratipu review into the future of Super Rugby will be presented to the board in two weeks. Robinson reported the 105 per cent uplift in crowd numbers and 88 per cent rise in viewership for Super Rugby Aotearoa were helping form options for a way forward, and that a "blank canvas" approach is being adopted to governance and ownership in the hope of attracting more private investment into the five New Zealand franchises. This includes expanding commercial rights such as broadcast revenue.

Sanzaar representatives meet again on Friday as a trans-Tasman competition, possibly involving one Pacific Island team, firms as the likely format for 2021.

"We'll be discussing formats and the future again from 2021 onwards and trying to balance the realities of Covid and what that means for borders and travel with the fact we've got a 25-year relationship with partners we value highly."