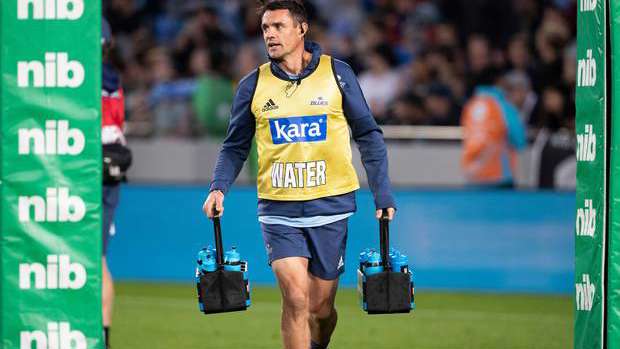 The chances of Dan Carter appearing for the Blues this season are fast dwindling.

Carter's attempts to recover from a calf strain appear to be hampered as he again watched his Blues teammates train at their Alexandra Park base on Wednesday.

The former All Blacks playmaker was due to make his Blues debut after being named on the bench for the loss to the Hurricanes in Wellington two weeks ago, only for the calf strain at Thursday training to rule him out of that match.

Carter has since missed last weekend's narrow escape against the Chiefs at Eden Park, but was hopeful of recovering in time to make his Blues debut against the Highlanders in Dunedin on Sunday.

The 38-year-old taking no part in training is not a promising sign, however, and he may now not appear for the Blues at all this season.

Carter posted a motivational message on Instagram today which read: "In my experience, failures are where you learn the most in life. Failures are not losses if you're taking a lesson away. Fail, learn, and keep pushing."

The Blues have two matches remaining in Super Rugby Aotearoa – their outing in Dunedin is followed with the bye week and the Crusaders at Eden Park in the final round.

Despite Beauden Barrett taking a limited part in training today as he recovers from the knock to the ribs he sustained against the Chiefs, he is expected to retain his place at first five-eighth, with Otere Black likely to come off the bench and Matt Duffie at fullback.

The Blues are expected to, therefore, name a largely unchanged side for the Highlanders, with No 8 Hoskins Sotutu also absent from their field session as he continues to recover from his knee injury that kept him sidelined for the past two matches. Hooker James Parsons also remains unavailable with ongoing concussion symptoms.

Even if Carter recovers in time for the final round match against his former team, it seems unlikely Blues coach Leon MacDonald would prefer him on the bench to Black.

While Carter sparked hopes of his debut for the Blues when he made a club rugby appearance for Southbridge against West Melton on July 4, MacDonald has always maintained he has been signed as injury replacement cover and for his mentoring ability.

"We've got to remember the purpose around Dan," MacDonald told the Herald recently. "He's here to provide cover in the case of injury or form and right now we're pretty happy with both."

With Barrett set to depart on his Japanese sabbatical next season, the question will soon turn to whether Carter will return to the Blues in 2021.