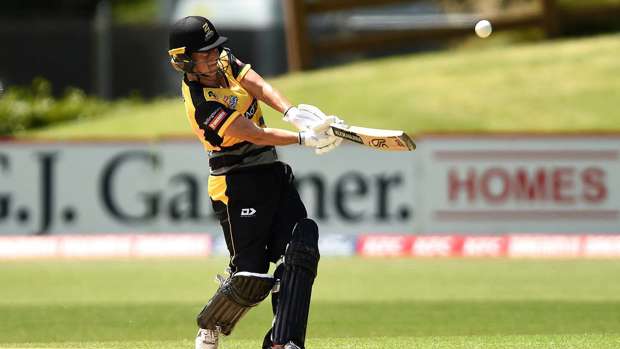 Sophie Devine has scored a record-breaking 108 from 38 balls as the Wellington Blaze thrashed the Otago Sparks in the Twenty20 Super Smash.

The White Ferns captain, only just returning to the side on Sunday from a 14-day managed isolation, notched her century off just 36 balls - the fastest hundred in women's Twenty20 history, beating Deandra Dottin's 38-ball ton for the West Indies against South Africa in 2010.

It's also the third-fastest Twenty20 century by any New Zealander, behind Martin Guptill's 35-ball ton for Worcestershire against Northamptonshire in 2018 and Scott Styris' 37-ball century in 2012 for Sussex against Gloucestershire.

Devine led the Blaze to a dominant 10-wicket victory in just 8.4 overs after the Sparks made 128-7 after winning the toss and choosing to bat.

Speaking after the match, Devine said she actually felt nervous coming back after 14 days in isolation and was pleased with her performance.

"I was really nervous this morning. Whenever you have a bit of an extended break away from the game, you get nervous about [whether] you can come back into it. So it was just [nice] to spend some time in the middle and get a few out of the screws.

"For me it was just about playing smart cricket – to know where my gaps were, trying to manipulate the field ... I felt I knew where they were trying to bowl so if I could manipulate myself around the crease, I could open up areas of the field, so, yeah, I'm pleased with the way it went today.

"Sometimes I can get a little bit carried away ... and I get a bit over eager and play some rash shots so it was nice to stick to some decent cricket shots today and finish the job."

The win moves the Blaze ahead of the Auckland Hearts at the top of the Super Smash ladder.