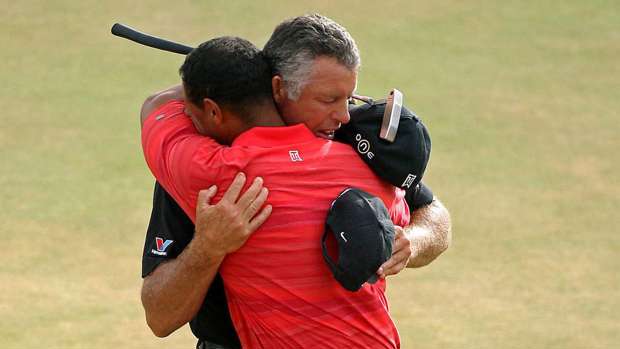 Tiger Woods' former caddie Steve Williams has opened up on being axed by the golf great and how cold the 15-time major winner went about the firing.

In the Tiger documentary, currently airing on Sky Sport, Williams said he was stunned by how Woods went about dropping him as caddie and revealed they haven't spoken since.

Woods dropped the Kiwi as his caddie in 2011 after Williams carried his bag for 13 years which resulted in 72 titles and 13 majors.

Williams says he was shocked by the way Woods went about the firing after he caddied for Australian Adam Scott while Woods was taking a break from the game.

"After the Masters, Tiger took a little bit of a break away from the game just to get his mind fresh as well as to deal with some niggling injuries. As a caddie of Tiger Woods and a great friend of his I wanted to deeply respect what he was going through but I still didn't know when he would be playing again," Williams said in episode two of the documentary.

"I was just expecting a phone call at any moment to say 'I'm playing again next week, get your s*** together and get over here'.

"There was a lot of uncertainty. So when a friend I had caddied for before called me and asked me if I could caddie for him, I ran that by Tiger and he said absolutely no problem. But a couple of days before the tournament, Tiger changed his mind. He had his agent call and he said 'if you go and caddie for your friend, that will be the end of your time caddying for Tiger'.

"I thought there was no way the guy is going to fire me. But a couple of days after the tournament I got the phone call to say our time had ended. I believe in my own heart I gave 100 percent when I was caddying for Tiger the entire time I was with him and for him to fire me over that kind of thing. I found that pretty unusual."

"When he fired me, I thought he was firing me as a golf caddie and not as a friend. Tiger was the best man at my wedding, I didn't think we'd have no communication for the rest of our lives. That just didn't even enter my mind. To this day I find that a hard pill to swallow. Someone you spend 13 years with, with all your time and all your effort, and the guy can't even speak to you."

In the second episode of the two-part series, Williams also opens up on one of the golfer's most famous victories when he claimed victory at the 2008 US Open on a busted leg.

The documentary claims Woods was obsessed with the Navy Seals during the mid 2000s and considered quitting the game to take up a full-time role with the military.

"I remember after this tournament one time, we were driving back to the house we were staying and he said to me 'I think I'm going to give up golf and I'm going to get into the Navy Seals'. That stunned me in my tracks to be honest. I actually couldn't believe it but he seemed incredibly serious. Anyone that's normal would be a Navy Seal but this man is wired differently. He's going to do something that tests you to the absolute limit," Williams said.

The documentary claims beatings during training sessions with the Navy Seals led to a serious knee injury for Woods.

"Tiger was in immense pain with his knee and when the scope his knee out they discover he has no ACL," Williams said.

"The doctors say to him you're going to need major reconstruction. But it's Tiger. He says 'F**** that. I'm going to deal with that later'. And he kept training. And of course he gets two fractures in his leg.

"I remember thinking you've brought it upon yourself. Self-inflicted. The doctors say to him you're going to be out of the game for a while but he's got the 2008 US Open looming. Can he win a major and be one step closer to breaking Jack Nicklaus' record? Jack's sitting on 18 majors and Tiger needs to eclipse that mark to prove he's the greatest player of all time.

"There wasn't anything to stop him. Two fractures in his leg and an ACL."
Williams then urged Woods to pull out of the 2008 US Open at Torrey Pines.
"I could see the look on his face, the agony he was going through. We all looked at each other and thought 'he has no right to be playing in the US Open'.

Williams said of when Woods sprayed a tee shot next to a cart path in the second round, he had to hit his next shot while standing on the concrete with his spiked shoes.

"As he went to hit the ball, his foot slipped out and I heard the crack in his knee. I just saw the look in his eyes. It was like he'd just been shot.

"I said to him 'Hey Tiger, you might be jeopardising your career here. Maybe this is the time to quit. And I'll never forget…he looks and me and he goes 'Stevie, f*** you. I'm winning this tournament''".

Woods went onto beat Rocco Mediate on the extra hole on an 18-hole playoff on the Monday. It was his 14th major title and he wouldn't win another until last year's US Masters.

The HBO documentary also looks into Woods' private life and his struggles off the golf course.

It covers affairs and sex parties that filled Woods' life before his marriage to Swedish model Elin Nordegren fell apart in humiliating fashion in 2009.

Woods' father Earl is a central character as the film explores the expectation he placed on young Tiger's shoulders and the example he set for him as a man who was unfaithful to his own wife.

It was Earl's 2006 death that is identified as the point where Woods' life started to spiral and he began making regular trips to Las Vegas where he would spend six figures in a weekend on prostitutes and partying.

The directors asked twice if Woods wanted to be interviewed, but were turned down.