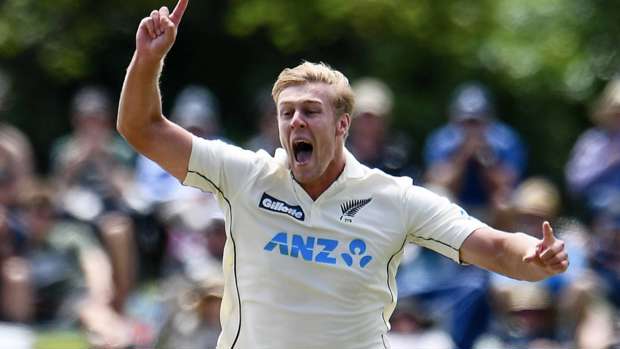 New Zealand's shiniest new sporting star bowled his team to an emphatic victory, but his captain believes Kyle Jamieson's attitude, not his height, is his most impressive weapon.

Jamieson ended the day with 6-48 and 11 wickets for the match, just the sixth New Zealander to achieve that feat.

"The most noticeable thing is height," said Kane Williamson, in explaining Jamieson's threat. "Coming from that trajectory and getting that extra bounce is a real asset, but the most impressive thing is his attitude.

"His ability to run in and hit the wicket hard for long spells – that's something that Tim [Southee], Trent [Boult], Neil [Wagner] and Matt Henry have prided themselves on.

"That's not an easy job but Kyle's come in and he's done that and done it extremely well. He's a really special talent but the way he's come in just tried to add to the group, whether that's on the field or off the field, has been the most impressive thing."

"Jamieson bowled very well. He was the only difference between the two teams," Pakistan captain Mohammad Rizwan said, stretching the truth a little. "Conditions favoured the bowlers but he bowled very well and took too many wickets in this series."

Rizwan was well positioned to judge Jamieson's contribution, falling to him twice, his dismissal on the last day one of the highlights of the match.

Midway through the second session of the fourth day at Hagley Oval, Jamieson let go a big inswinger that drew Rizwan forward before ripping between bat and pad to clip the leg bail.

"The inswinger was a bit of a project in the winter and that's come in handy a couple of times," Jamieson said with a wry grin.

It also brought up two significant individual milestones. It was Jamieson's fifth wicket in the innings, the fourth time he has bagged a five-for in his nascent career.

It also brought up 10 for the match for the 2.03m right-armer. To give some perspective, Southee is playing his 77th test and has achieved that feat once. That is not a knock on Southee, one of the country's fast-bowling greats, but an illustration of Jamieson's extraordinary start to his six-test career.

Only Sir Richard Hadlee and Daniel Vettori have better match returns for New Zealand than Jamieson, but it won't surprise you to learn he doesn't take much notice of statistics.

"The most important thing for me is to try to help win games," he said. "If that stat is good, we're winning games, I'm happy.

"Those two guys are legends of New Zealand cricket and I've just played my sixth test so while it's nice to be in and around those names, for me I'm just happy to be part of this group and help in some small way to help winning games."

Jamieson said he still has a lot to work on and improve. He plans on sticking around for a decade to show you.