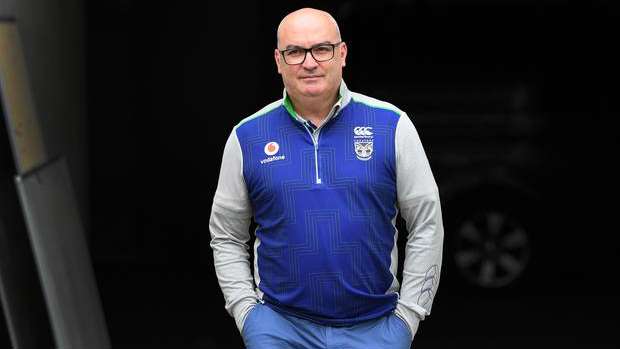 Warriors chief executive Cameron George has rubbished suggestions the club will consider withdrawing from the NRL if the players are unable to be joined by their families.

Reports out of Australia suggested the NRL was worried the Warriors would return home after their game against the Sharks in just under three weeks if the players' families can't get into the country.

However, speaking to the Herald, George quickly set the record straight when asked if the team would look to pull out of the competition.

"Where are you getting that from?" George responded.

The Warriors met with the NRL at the weekend to discuss the situation of getting the players' families into Australia, with murmurs that some of the playing group would return home if nothing changed.

The club agreed they would see out the next three weeks and see if anything changed. If not, they would revisit the situation. George said while some players may wish to return home at that point, the team would still be a part of the competition.

It is expected the club and the NRL will have a better understanding of where the situation is by the conclusion of the next three rounds in what is an ever-changing environment thanks to the pandemic.

The Warriors' situation this season has been a talking point even before it was put on hiatus due to the coronavirus pandemic, with travel restrictions playing a major part in the narrative.

From relocating to Australia to seeing their head coach fired and their performances lacking consistency, it's been a chaotic and unusual time for the club.

But while some players may wish to turn home in the coming weeks, others are taking the opportunity for what it is.

Rookie prop Jamayne Taunoa-Brown said there was a silver lining to the situation.

"I guess it's pretty special because this will probably never happen again, so I guess it's good to be a part of it," he said.

"I'll be better off for everything that's gone on in the past couple of months. Long term, I think it'll be a good thing."

Despite being on the wrong side of lopsided results in recent weeks, the Warriors have shown plenty of potential in their play, though lacking in execution against two of the perennial contenders in the competition in the South Sydney Rabbitohs and Melbourne Storm.

The Warriors were the dominant side in the opening exchanges of both matches, but dropped their heads after their efforts came to nothing and they found themselves behind on the scoreboard.

Over the next three weeks, they face a lower calibre of competition with the Brisbane Broncos (15th), Gold Coast Titans (13th) and Cronulla Sharks (11th) next on the schedule.

While posting a 2-5 record through seven rounds, the Warriors have only played three matches against sides currently outside the top eight - winning two of the three.

"We just have to keep putting our best foot forward and try to do all the right things," Taunoa-Brown said.

"We all know what we've got to do. It's just a matter of going out there and doing it."