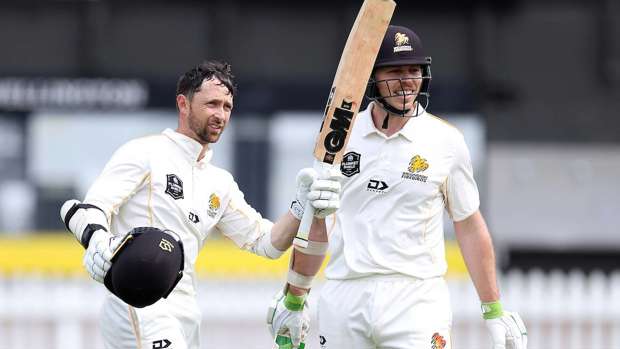 The inevitable is upon us, with Devon Conway selected to play for his adopted country at the first available opportunity.

The 29-year-old will become the latest to fall, fully formed, off the production line that is South Africa when he takes his place in the side to face the West Indies in three T20Is, which start at Eden Park on November 27.

The southpaw top-order batsman has been in prolific form for Wellington in domestic cricket and last year secured a "triple crown" by being the leading run scorer in the Plunket Shield, Ford Trophy and T20 Super Smash. His naming to the Black Caps squad comes just a day after he recorded his 18th first-class century.

Indeed, most judges deem him to be a better red-ball batsman than a white-ball one but it has become the norm for New Zealand to blood players in the shortest format.

Gary Stead named his first two squads for the season and while Conway's elevation is the most eye-catching feature, there are a number of talking points.

Kane Williamson and Trent Boult, who are coming off the back of excellent Indian Premier League campaigns, have been rested for the T20 series to get their red-ball groove back in time for the first test at Hamilton starting on December 3.

"We've had to make a decision on Kane and Trent to prioritise the test matches, given how important they are to our red-ball team and the fact they both played such big roles in the recent IPL while also managing injuries," Stead said.

That has opened up the space for Conway and the in-form Kyle Jamieson to take their place in the Tim Southee-captained side.

However Southee, Jamieson and Ross Taylor will leave the T20 squad after two games to join the test squad in Hamilton.

Mark Chapman, Doug Bracewell and Scott Kuggeleijn will join the T20 squad for the third match.

The test squad is settled, with the only question marks surrounding the fitness of left-arm spinner Ajaz Patel (calf) and allrounder Colin de Grandhomme (foot).

"Colin and Ajaz have quite different injuries which are requiring different return to play protocols. It's too early at this stage to definitively say what their chances are but we're hopeful the next two weeks will make that clearer," Stead said.

Will Young has been retained ahead of Conway as back-up batsman, while Tom Blundell will be given another chance to impress at the top of the order after impressing in Australia.

Stead pointed to the complexities of the schedule when naming his teams.

"I think we're all very aware and appreciative of how much work has gone in to make this home summer possible – in what is clearly unprecedented times," Stead said.

"The season schedule is complex and for the first time we're going to have a test squad assembling on the same day we're playing a T20 international in another city.

"We've got players at quite different stages with some having played almost a month of domestic cricket, some in managed isolation following the IPL and others battling injuries."

Fresh from the IPL, Lockie Ferguson, Jimmy Neesham, Mitchell Santner and Tim Seifert are set to finish their managed isolation on November 26 and link up with the T20 squad that evening, the night before the season opener.

Stead will take a 'wait and see' approach with the fitness of Test regulars Colin de Grandhomme (right-foot) and Ajaz Patel (left-calf), but said he'd give them every chance of being available for the first Test starting in Hamilton on December 3.

The BLACKCAPS T20 squad, minus the IPL players, assemble in Auckland on Tuesday November 24.