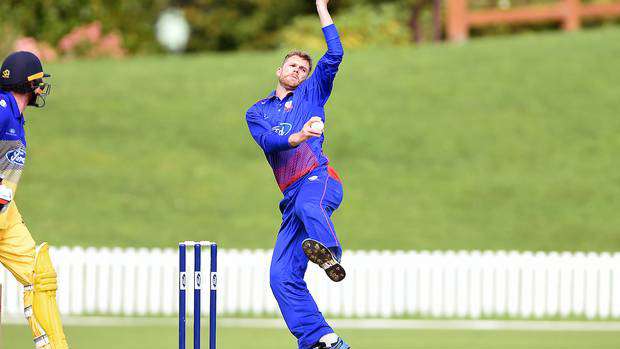 Lockie Ferguson is back on the pitch but a swift return to the Black Caps appears unlikely.

Ferguson, who will be watching from afar as the Black Caps play their final ODI against India at Mount Maunganui on Tuesday, hasn't played for New Zealand since their series opener in Perth where he suffered a muscle-tendon strain in his right calf while bowling.

The 28-year-old speedster made it through 11 overs in what was his test debut before being ruled out of the side since.

Having eased back into club cricket late last month, Ferguson made his domestic return with the Auckland Aces yesterday in the Ford Trophy.

He was pleased with how things were tracking but insisted that stepping back onto the international scene could take some time.

"This was one of the steps, to see how I go in a domestic one-day so it went well but certainly the intensity steps up quite significantly going into an international match," Ferguson told Radio Sport.

"I've been playing a lot of cricket over the last three weeks with a conservative approach to building the intensity back up. With calves, I didn't realise how much work they do when you've got to walk [and] jog, and with these kinds of tears, it's important just to build the load back up and give it time to heal.

"It's feeling pretty good so we'll just keep taking these steps forward and hopefully, it's all positive."

It was far from a dream return to the domestic game for Ferguson result-wise, with Auckland falling to their biggest-ever Ford Trophy defeat with a 210 run loss to Otago.

Ferguson, however, wasn't concerned ahead of Sunday's grand final.

"Nothing really changes, we've got a really good culture at Auckland at the moment where we work really hard as a unit and put a lot of pressure on each other at training," he said.

"Fortunately we'll be playing the next game at Eden Park ... it can be one of those intimidating grounds sometimes for bowlers, and batters can feel the pressure having to score quickly, but obviously being our home ground we've played a lot of cricket there so we can take a lot of confidence into Sunday."

In the meantime, the Black Caps will round off their three-match ODI series against India tomorrow in Tauranga.