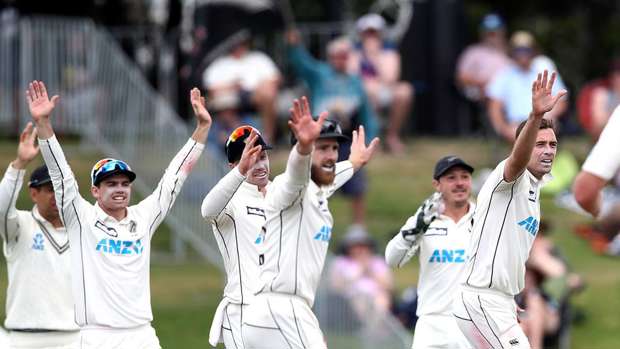 Black Caps' players and fans will be keeping an eager eye on the Gabba in Brisbane today for the final day of the fourth test between Australia and India.

The result of the final test of the series will have major implications on whether or not Kane Williamson's side, aka the number one ranked test team in the world, will feature in the World Test Championship final in England later in the year.

Heading into today's final day of play India are four without loss chasing 328 for victory. The series sits at 1-1.

As it stands New Zealand sit third on the test standings with a winning percentage of 70 percent. But that could change today Australia lead on 73.8% with India just ahead of New Zealand on 70.2 percent.

The Black Caps have no more tests remaining before the finalists are decided while India head home to face England in a four-match series.

Australia are set to play three tests in South Africa but the series remains in doubt due to Covid-19 concerns.

Let's do some calculations.

- If Australia win today, the Black Caps chances strengthen - hosts India would need to sweep England 4-0 to recoup the difference.

- If the test's drawn in Brisbane - that also works in New Zealand's favour as India would need to beat England 3-0.

- If India win, they move into the lead, but New Zealand go would ahead of Australia.

England still remain a chance to make the final after beating Sri Lanka in the opening test of their two-test series. But they would need a remarkable 3-0 result in India to force their way into the conversation.