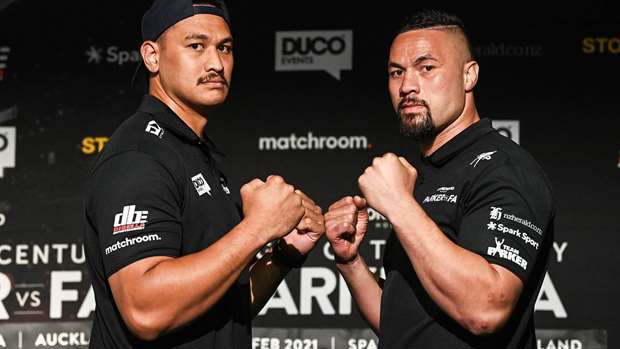 On Saturday night, Joseph Parker and Junior Fa will square off in arguably the biggest bout between two Kiwis ever hosted on our shores.

And while it's been a bout a long time in the making, it might not be the only time we see it.

Parker, the former WBO world heavyweight champion, has a rematch clause written into the fight contract to allow him another shot at Fa if the result doesn't go his way this weekend. However, the rematch clause is only available to Parker.

It's a similar situation to when the 29-year-old put his title on the line against unified champion Anthony Joshua in 2018. Joshua had a rematch clause in the contract available if he had lost; Parker did not.

"The rematch clause is there for him," Fa confirmed. "So, when I win there will be another fight.

"So, there will be two fights."

While a nice option to have, Parker said it wasn't something he specifically requested in the contract, admitting he did not even know his team had negotiated it until he saw the paperwork.

"I just let the team deal with that," Parker said.

"I was like 'oh sweet. Thanks for looking out'. I mean, for the Joshua fight, he had a rematch clause and I didn't, and I feel like it's similar to that."

The bout shapes up as a pivotal on in the WBO's heavyweight division, with Parker and Fa ranked at No3 and 5 respectively. The highly anticipated match up will be broadcast around the world to more than 180 countries and many have suggested there are world title implications involved with it.

Billed as the Fight of the Century, the same moniker that was given to the 2009 bout between heavyweights David Tua and Shane Cameron, Saturday's bout shapes up to be as big, if not bigger, than that contest given their rankings of Parker and Fa.

Parker vividly recalls huddling around the television with a group at his partner's house to watch the bout between Cameron and Tua – a second-round knockout win for Tua – and said it was humbling to think that he and Fa were now in that same position.

We're two guys from South Auckland, we're the main event and it's going to go to 180 countries," Parker said.

"That's like a dream; two guys from South Auckland both ranked in the top 10 and we're going to make some history."