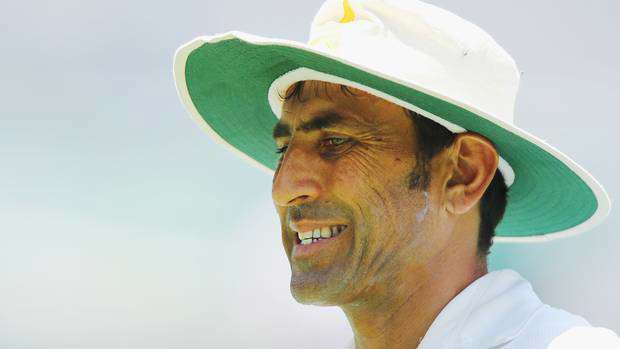 Cricket great Grant Flower has revealed former Pakistan captain Younis Khan held a knife to his neck after offering some batting advice during a Test series against Australia.

Flower played 67 Tests and 221 ODIs during his international career, and is widely regarded as one of Zimbabwe's greatest batsmen.

The Zimbabwean served as Pakistan's batting coach between 2014 and 2019, and toured with the national squad during the 2016/17 Test series in Australia.

Speaking to the Following On Cricket Podcast, Flower considered Khan to be the toughest player to mentor, and detailed a scary encounter with the cricket superstar in their Brisbane hotel during the first match of the series.

"Obviously, a brilliant career. I remember one incident in Brisbane, during the Test, at breakfast I tried to give him a bit of batting advice, not that my career was anywhere near his regarding stats, as he is the highest scorer in Pakistan Test cricket.

"But he didn't take kindly to my advice and brought a knife to my throat, with Mickey Arthur sitting alongside, who had to intervene.

"Yeah, it's been interesting. But that's part of coaching. It makes it a hell of a journey, and I've really enjoyed it. I've still got a lot to learn, but I'm very fortunate to be in the position I am."

Arthur, who had previously served as Australian head coach before he was axed in 2013, recalled the incident.

"It was a dining knife that Younis Khan had in his hand," Arthur said.

"I calmed Younis down and just wanted him to get runs in the second innings, which thankfully he did"

Khan made a golden duck at the Gabba in Brisbane after knicking off to Josh Hazlewood in the first innings, making his six previous Test innings 0, 2, 1, 2, 11 and 0.

He somewhat redeemed himself with a classy 65 on day four. However, Khan was berated by Channel 9 commentator Waqar Younis for his reckless dismissal in the second innings, in which he attempted to reverse sweep Australian spin bowler Nathan Lyon.

"That is ridiculous," Younis said.

"That is so irresponsible. A man with so much experience, you don't need to do that, what was the need? Pakistan needed you to be out there and (you) played a false shot. Yeah he's got 65, but very poor shot.

"What was the need of that? I don't know. He was not in control at all. I'm lost for words. Ridiculous."

Pakistan went on to lose the Test and the three-match series 3-0, with Khan scoring 298 runs in six innings, including a century at the SCG.

Ironically, Khan was recently appointed as Pakistan's batting coach for the upcoming Test tour of England.

The 111-Test veteran retired in 2017, ending his international career with 17,790 runs. No Pakistani cricketers have scored more Test runs than Khan, who plundered 10,099 runs at a stellar average of 52.05.