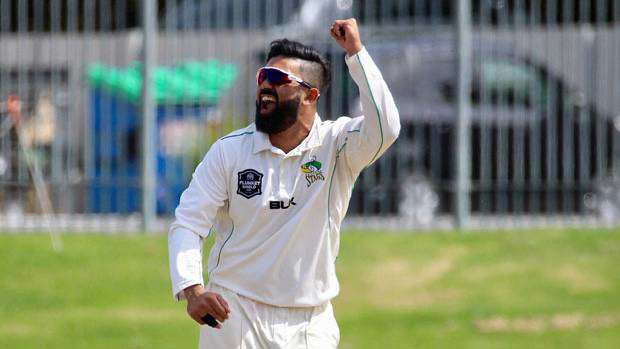 Central Stags left-arm spinner Ajaz Patel is in line to make his Black Caps debut after being named in the Test squad to play Pakistan in the United Arab Emirates.

The 29-year-old, named last season's Domestic Player of the Year after helping the Stags to the Plunket Shield title, has been called into the squad as a replacement for Mitchell Santner, who is still recovering from knee surgery.

Patel has been the Plunket Shield's top wicket-taker over the past three seasons, snaring 48 wickets at 21.52 in his most recent campaign.

He has also been named in the NZ A squad, which will tour the UAE ahead of the Black Caps, playing three T20s, three 50-over games and two first-class matches against Pakistan A.

Selectors Gavin Larsen, and Mike Hesson – in his last assignment for NZC before stepping down from his Black Caps head coach role at the end of this month, today announced the Test, ODI, T20 and NZ A squads for the UAE tour, which will start in mid-October.

Larsen said the tour presented a good opportunity for Patel, who will join Todd Astle and Ish Sodhi as a front-line spinner in the 15-strong Test squad.

"Ajaz has deserved his inclusion on the sheer weight of his domestic first-class form over the past couple of summers," said Larsen.

"With Mitch Santner not fully recovered yet from his knee surgery, it's nice to have both wrist (Astle and Sodhi) and finger (Patel) spin options, given the likely conditions in the UAE."

The selectors opted to include a second wicket-keeper in Tom Blundell alongside BJ Watling in the Test squad.

Watling has also been selected in the ODI squad to play three matches against Pakistan, with two players to be added later – either from the T20 or the NZ A sections of the tour.

The Black Caps T20 squad will also draw on two further players from NZ A, one of whom will replace front-line paceman Trent Boult, who will be on paternity leave.

Boult will join the tour for the ODI and Test series.

The NZ A squad will feature first-time selections for Patel, pace bowlers Kyle Jamieson and Blair Tickner, and NZ Under 19 representative, Rachin Ravindra.

Tim Seifert, Mark Chapman and Lockie Ferguson will play the T20s for NZ A before moving into the Black Caps' T20 camp.

Larsen said with NZC placing a bigger emphasis on the "A" programme, it was an exciting time for the country's emerging players, and an excellent opportunity to develop and expand their capabilities.

"This is a great opportunity for us to expose our emerging players to foreign conditions and help develop and expand their games," he said.

"Given India A will also be visiting New Zealand over the summer, there is a lot to play for."