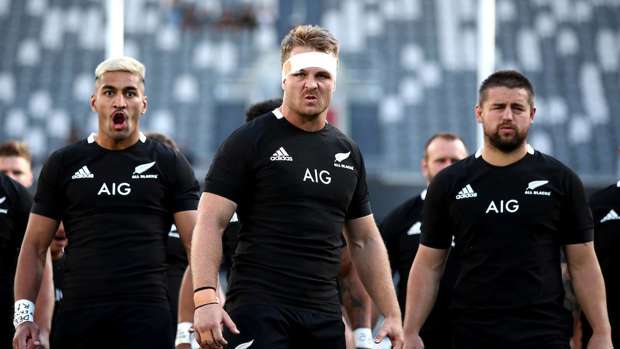 All Blacks stars have revealed their toughest opponents and the test matches most challenging in their careers.

When asked "what game had been the hardest in their career so far", one opponent stood out.

"Every game we play against South Africa," Frizzell said. "Especially when we play in South Africa ... just the stadium, and they're big boys."

"Games in South Africa with the altitude, and in front of their fans is just a different atmosphere," Barrett added. "A few years ago at the World Cup... that was pretty tough."

"That was a really tough game," Reece said.

The All Blacks haven't faced the Springboks since the 2019 Rugby World Cup after the Covid-19 pandemic saw the current World Champs withdraw from last year's Rugby Championship.

New Zealand Rugby boss Mark Robinson signalled earlier this week that South Africa are keen to go another Rugby Championship without home tests but are set to host the British and Irish Lions in a three-test series in July and August without fans.

Meanwhile, another question that sparked some interesting stories being shared, was "which teammate is the most fun after a big win".

A number of players made the cut such as Jordie Barrett, Anton Lienert-Brown and Reece but Richie Mo'unga emerged as the unanimous top pick.

"Loves a party," Coles said. "After the last time we played Argentina we had a two and a half hour bus ride home and he was leading the charge on the bus, shirt off straight away, dancing."

Then Reece continued: "After a big game, you walk into the changing room and you'll see him there always with his knees bent and his shoulders going like that and a big smile, it just makes it more fun and more exciting. Seeing that kind of energy in the changing room just completes everything."