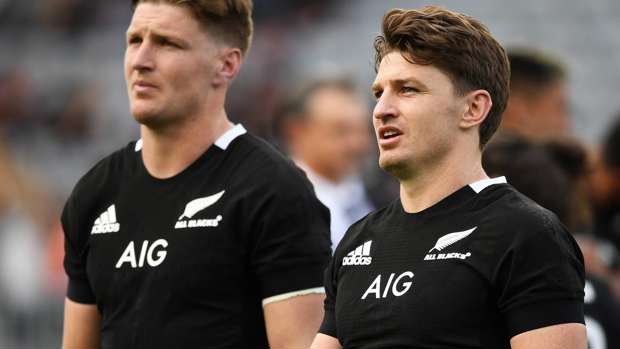 Picking from a jam-packed list in a decade of professional rugby, All Blacks superstar Beauden Barrett has revealed the top teammates of his career.

The utility back has played for five professional sides in the All Blacks, All Blacks sevens, Hurricanes, Blues and Taranaki, as well as representing the New Zealand under-20s, Coastal Rugby Club and his high school Francis Douglas Memorial College.

The professional teams will turn over to six next year when he joins Suntory Sungoliath in the Japanese Pro League, as part of his sabbatical year in his New Zealand Rugby contract.

In his latest book Beaudy: Skills, Drills and the Path to the Top, which Barrett wrote with sports broadcaster Rikki Swannell, he offers insight into his early life and how he rose to become one of the greatest All Blacks of his generation.

Within it, he ranks the 10 players he has most enjoyed playing alongside and sharing time with off the pitch.

Without much surprise and in somewhat cheating fashion - extending 10 to 12 - Barrett lists his three brothers Scott, Jordie and Kane as his equal favourites.

As well as the All Blacks, Beauden and Jordie represented the Hurricanes together for three years before the former moved north to the Blues. Due to their closeness in age, Beauden and Kane played together when they were youngsters as well as in the NPC. The odd one out who only has tests alongside Beauden to boast is Scott, who has spent his domestic career with Canterbury and the Crusaders.

Taking second spot is All Blacks sevens star Kurt Baker, who spent many of his forming years in professional rugby with Barrett. Both played in the national sevens side as well as Taranaki.

"Kurt has gone on to have a stellar career," Barrett says. "He's the ultimate team man, a real character and a bit of a clown!"

A couple of intriguing nominations include veteran prop Ben May listed third, who was Barrett's old "house mate" in their playing days together and has also represented the Hurricanes.

"He can play both sides of the scrum and always makes an impact whether he starts or comes off the bench. He's always a popular team man," Barrett says.

Hurricane James Marshall ranks at No 5, someone Barrett shared the amber and black jersey and Taranaki duties with.

"The fact that James was named Hurricanes 'team man of the year' more than three times tells you so much about what a great person and teammate he is. He's a genuine comedian and loves a punt!" Barrett says.

One name that will stick out as an outlier is Rick McKenna, who was teammates with Barrett at Francis Douglas Memorial and Coastal rugby club, and also spent time with Taranaki.

"He has played more than 100 games for Coastal and has been a bit of a points-scoring machine in club rugby. He was a cheeky lad who had a great bag of rugby balls and we spent hours kicking together."

The rest of the list is filled out by former and current All Blacks Israel Dagg, Dane Coles, Damian McKenzie, Anton Lienert-Brown and TJ Perenara. There is a definite theme of Hurricanes players, with five of the 12 having worn the yellow and black jersey.

A group who do not feature are Blues teammates Barrett shared the field with in 2020 in Super Rugby, although he has played just nine games for the Auckland franchise.