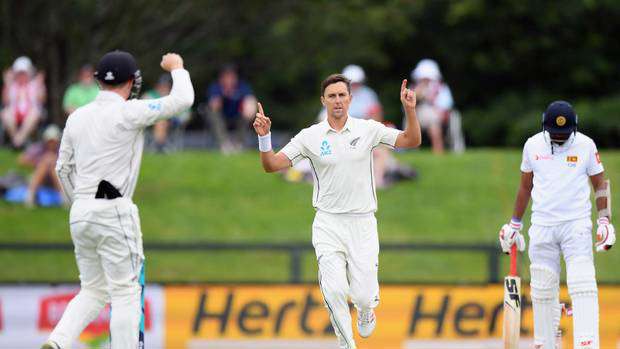 The Black Caps have made history – in more ways than one.

It took just 10 minutes to end Sri Lanka's resistance on day five, giving the Black Caps a mammoth 423-run victory – their biggest win by runs in their 88-year test history, and the eighth largest of all time.

It was a worthy way to bring up another major milestone – a fourth straight test series victory, the first time New Zealand have accomplished that feat.

After victories over the West Indies, England and Pakistan, this series triumph was the most dominant of the lot. Only a historic partnership, placid pitch and rain saved Sri Lanka in Wellington, and after some day one wobbles, the Black Caps were always in command in their crushing series-clinching win.

With Sri Lanka resuming on the final day at 231-6 and still needing another 429 runs, there was only likely to be one result, and sure enough, it was over quickly.

Sri Lanka only offered six further balls of struggle before Dushmantha Chameera was trapped lbw by Boult, and Angelo Mathews, who had retired hurt with a hamstring injury yesterday, decided not to come out to bat in lost cause. It was the smart decision – being unable to run, he would have merely reduced New Zealand's margin of victory, hardly worth the risk of aggravating the injury.

So, when Chameera departed, that was it, with the Black Caps etching two new marks into the record books.

They now turn their attention to three one-dayers and a solitary Twenty20, but considering the purple patch they're in, their run of series victories may well stretch to all formats.