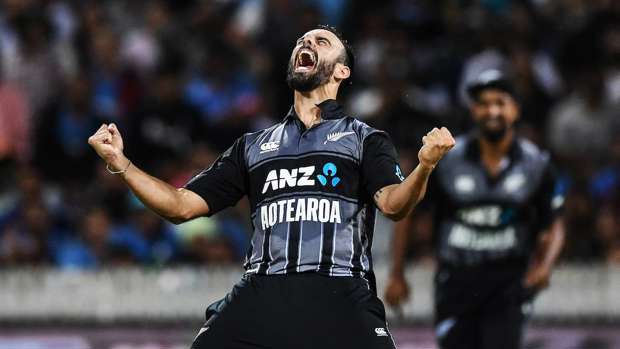 It might not be the series win that New Zealand cricket fans were hoping for when India landed on these shores, but that doesn't make the Black Caps' Twenty20 triumph any less impressive.

A four-run victory at Seddon Park in Hamilton tonight sealed a 2-1 series win, as New Zealand bounced back from their ODI humbling to become the first team to beat India in a Twenty20 series in 11 attempts.

Yes, this was an achievement that no team had managed since 2017, and while India weren't at full strength, the destructive batting on show by some versatile players is something that should provide some confidence as the ODI World Cup looms.

While neither will feature in the first two ODIs against Bangladesh this week, Colin Munro and Tim Seifert both made their cases as potentially devastating squad options to take to the World Cup, once again combining for an innings-defining stand at the top of the order.

Considering the Black Caps can't buy an opening partnership in ODI cricket, it's curious, though likely coincidental, that they have twice now blazed dominant beginnings at the top of the order in Twenty20s.

Seifert proved his innings in Wellington wasn't a fluke with a bold 43 from 25 balls, before he fell, stumped, and potentially victim to another controversial replay decision, with debate over whether his foot was planted behind the line.

Regardless, it was still a splendid platform set when he departed at 80-1 in the eighth over, and while Kane Williamson's insistence on early strike rotation was completely unnecessary with nine wickets in hand, Munro again showed why he is such an alluring option in short formats, blasting 72 from 40 balls.

Williamson did manage to pick things up, nursing some of his trademark classic fours in his knock of 27 from 21 balls, before handing over to the hitters to finish off the innings.

They, too, did their job. Colin de Grandhomme made it back-to-back contributions with 30 from 16 balls, before Daryl Mitchell (19* from 11) and Ross Taylor (14* from seven) saw the hosts set 213 for victory.
It seemed like enough – only four times had a total higher than 212 been chased down in a Twenty20 international – and when Shikhar Dhawan was caught in the deep off Mitchell Santner's bowling in the first over, India's task was made even tougher.

However, first Vijay Shankar (43 from 28 balls), then Rishabh Pant (28 from 12) took a liking to the bowling of Ish Sodhi, as India rattled along at a fast rate. Crucially though, the required run rate never dropped below 10 an over, and some comparatively restrictive bowling from Mitchell and debutant Blair Tickner ensured the chase remained exceptionally challenging.

The pair claimed a vital wicket apiece in the middle overs, with Rohit Sharma's struggles (38 off 32) ended by Mitchell, while Tickner removed Pant with a slower full toss, ensuring India could never get on top.

Hardik Pandya briefly threatened, blasting 21 from 11 balls, but cameos weren't enough, and as the required run rate got higher, India were left needing 48 from 18 balls for victory.

Three balls later, that equation was a much more manageable 33 from 15, and some further lusty blows from Dinesh Karthik and Krunal Pandya produced a jittery finish, with 16 required from the final over.

However, Tim Southee held his nerve at the death, to kill India's unbeaten run.