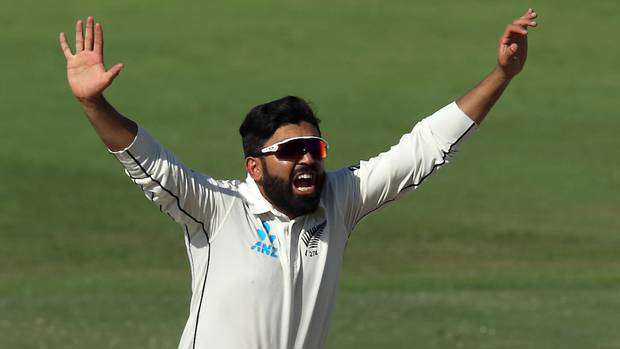 They ripped them apart with their seam bowlers at the Cricket World Cup, but now the Black Caps are hoping to put Sri Lanka in a spin.

Four spin bowlers have been named in their 15-man squad for two tests in Sri Lanka next month, with Will Somerville and Ajaz Patel given a chance to repeat their heroics from last year's test series win over Pakistan, while Mitchell Santner and Todd Astle provide balance as theoretical all-rounders.

It's quite the contrast to their squads for tests at home – where one spinner is usually selected as a box-ticking exercise, and barely bowls – but the Black Caps are preparing to play on Sri Lankan wickets where spinners utterly dominate the domestic wicket-taking charts.

In the last test series to be played in Sri Lanka, England regularly bowled three spinners and only one front-line seamer, having to pick between Jimmy Anderson and Stuart Broad. That sole seamer would then bowl five overs to open the innings, in tandem with a spinner, before being sent to the deep to operate as a specialist fielder. In the third test, seamers bowled just 46 of 315.1 overs sent down in the match.

That could be an indication that New Zealand's star seam-bowling trio – Trent Boult, Tim Southee and Neil Wagner – could again be broken up on the subcontinent, despite all three being selected. If conditions dictate, potentially only Boult could be used, with Colin de Grandhomme's cross-seam medium-pacers a secondary seam option if required.

That would leave the spin quartet vying for three places. Astle is unproven at test level, but he and Santner – whose record (34 wickets at 37) is actually better than most of the options tried in his 18-month test absence – would allow New Zealand to bat deep, giving the pair a strong leveller in the race with Somerville and Patel.

It was a legitimate possibility that Somerville – who will turn 35 before the first test in Galle on August 14 – would never play another test after his seven wickets in the famous third test victory over Pakistan in December. However, he should get another go in conditions that will suit, while Patel should also find surfaces more to his liking than during the 43 restrictive but wicketless overs he bowled during the New Zealand summer.

"Playing three spinners is an option in Sri Lankan conditions and we believe this group provides the best variations and skill mix on offer."

As a result of the impending turning tracks, there was no need to hand a test debut to Lockie Ferguson, with he and Matt Henry likely to come right into contention for the rest of the test summer. The rest of the squad would have picked itself, with the top six all easy selections after a strong New Zealand run-scoring summer, and Tom Blundell set for another stint energetically running the drinks after being selected as batting and wicketkeeping cover.

However, after cashing in at home, including against Sri Lanka, harder examinations await for the likes of Tom Latham, Jeet Raval and Henry Nicholls, as they get another test on wickets they won't see the likes of again until next August, when they visit Bangladesh.

The two tests will also be the teams' first test series in Sri Lanka since 2012, where New Zealand were crushed by 10 wickets in Galle, before bouncing back to win by 167 runs in Colombo.

Only Kane Williamson, Ross Taylor, Boult, Southee and Astle (on debut before a four-year hiatus) remain from that series, with these two tests to count towards the new ICC World Test Championship. While the Ashes mark the Championship's debut, this series will be the first to be completed, as the two sides strive not only for a series victory, but to take the lead in the test cricket's new prize.