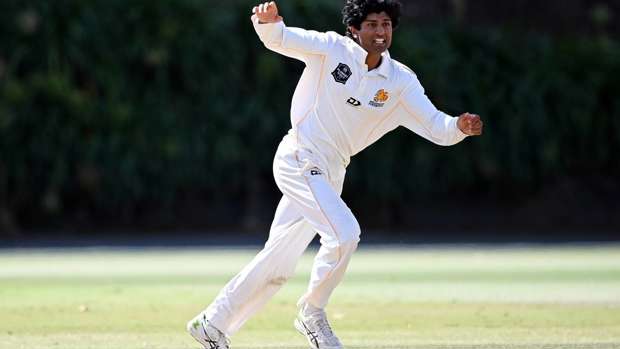 The Black Caps have named a left-arm orthodox, right-arm swing heavy squad to face England for two tests in June.

As anticipated, 21-year-old Wellington all-rounder Rachin Ravindra is the closest thing to a bolter in the 20-strong touring party named by selectors Gary Stead and Gavin Larsen. He will join provincial teammate Devon Conway and Otago's Jacob Duffy as the only uncapped members of the squad.

Earning recalls are Doug Bracewell and Ajaz Patel, with the former subject to a fitness test on his hip before being cleared to fly. Colin de Grandhomme (ankle) and Ross Taylor (hamstring) have also been selected pending fitness tests that both are expected to pass.

The unluckiest player to miss selection is Auckland's Glenn Phillips, a white-ball dynamo who rose to the red-ball occasion when scoring a half century on test debut against Australia last year.

He has added some fairly raw off-spin to his repertoire but the selectors have instead opted for three left-armers in Patel, Mitchell Santner and Ravindra.

If selected to play, Ravindra would be the youngest New Zealand test player since Ish Sodhi debuted at 20 against Bangladesh in Chattogram in 2013.

In this his third and most successful professional season, the left-hander notched twin hundreds for New Zealand A against the touring West Indies and recently returned from a dislocated shoulder to record his first Plunket Shield century, followed by six wickets in Wellington's final-round draw against Auckland.

"Rachin's been earmarked as a star of the future since his Under-19 days and we've been really encouraged by the advancement in his game this season, with both bat and ball," coach Gary Stead said. "He's obviously an opening option, but also has the ability to bat in the middle order which combined with his left-arm finger spin make him a great asset to our squad.

"Jacob's been a consistent performer on the domestic circuit and his ability to swing the ball made him a particularly compelling option with a Dukes ball in English conditions."

Swinging the ball away from the right-handers is seen as a critical component in English conditions, hence the selection of a posse of right-arm fast-medium pacers, including Tim Southee, Kyle Jamieson, de Grandhomme, Duffy, Bracewell and Matt Henry, with Daryl Mitchell also capable of finding movement in the right conditions.

The out-and-out pace of Lockie Ferguson must have been tempting, but Stead said it was too early after recovering from a stress fracture and his primary focus would be on the T20 World Cup in India later this year.

All 14 players who featured in the home test summer have been selected, while Conway comes in after a prolific start to his international white-ball career.

De Grandhomme and Patel return after injuries robbed them of chances this season, while Central Districts' Bracewell, listed as an all-rounder, returns close to five years after his last test against South Africa at Pretoria.

Bracewell enjoyed a consistent Plunket Shield, where he averaged 26 with the ball and 43 with the bat, and claimed nine wickets for New Zealand A at 19.6.

"Colin's injury is progressing well and we're hopeful he will begin running again shortly. We'll monitor him closely over the next few weeks to ensure he's on target.

"It's been pleasing to see Ajaz back playing consistently since missing the early part of the season and he's proven in the past what he can do if the ball is turning."

The squad will hold two training camps in early May before departing for England in two groups on May 16 and 17.

Players involved in the IPL will be managed on a case-by-case basis depending on when their team exits the tournament.

The two England tests take place at Lord's starting June 2 and Edgbaston on June 10. The squad will then be trimmed to 15 for the World Test Championship Final at the Ageas Bowl in Southampton starting on June 18.