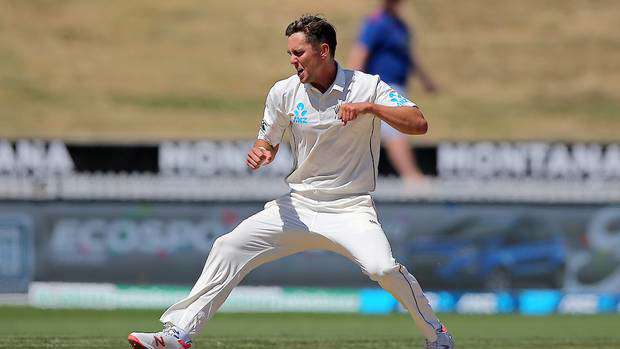 It took much longer than anyone expected, but, eventually, the Black Caps wrapped up a dominant test victory over Bangladesh.

A 235-run partnership between Soumya Sarkar (149) and Mahmudullah (146) made the Black Caps bowlers toil on day four of the first test at Seddon Park, but while Bangladesh's resistance gave the visitors something to smile about, avoiding defeat was always going to require a miracle.

A session passing without success for the hosts caused frustration, but after Trent Boult finally broke through Bangladesh's defiance, they tumbled from 361-4 to 429 all out as the Black Caps claimed victory by an innings and 51 runs.

And while there'd be some lingering discontent about their second innings bowling performance, there can't be too many complaints from the Black Caps. Sure, a better side than Bangladesh might have taken even further profit from some uninspired bowling early on today, but when you score 715-6, and win by an innings, there are only so many negatives you could point to.

Black Caps captain Kane Williamson was pleased with his side's performance throughout the four days.

"It was a really good performance by us. The first innings of the match was vital and we were able to pounce on that opportunity. We knew today it would be really difficult to take the last wickets on a surface that wasn't offering much. Bangladesh batted outstandingly well – but it was great that we were able to stick with it as a bowling unit, and reap those rewards later on in the day.

"It was challenging – it was test cricket – there was a lot of toil there but it was nice to get those breakthroughs."

The Black Caps bowlers wouldn't have been overly pleased with their early efforts today. Soumya and Mahmudullah feasted on a short-ball barrage, taking risks but watching them pay off as they swatted Boult and Neil Wagner behind square leg with reckless abandon.

On a wicket still offering plenty for the batsmen, Soumya went through to his maiden test century, and Mahmudullah his fourth, as they also cashed in on the unthreatening offerings of Todd Astle and Colin de Grandhomme.

Suddenly, the Black Caps looked one-dimensional, and memories of Kusal Mendis and Angelo Mathews batting for an entire day at the Basin Reserve last year flooded to mind.

However, Bangladesh's hopes that the pair would emulate Sri Lanka were dashed by the new ball, as Boult knocked over Soumya's stumps, and he nabbed the wicket of Liton Das soon after, chopping on.

Mahmudullah – controversially given not out first ball after a debatable DRS verdict – carried on, hitting some glorious drives and savage pulls to record his highest test score – but he got no help from the tail, with none of the last five batsmen passing four.

Bangladesh's fight had a frustrating side effect for Mahmudullah, who believed his side should have played with similar resolve in the first innings.

"That was probably the crucial part where we missed out, because the wicket was quite good to bat on. We didn't work hard enough to get in and play our [styles]. In the second innings we were a bit gutsy – these are the positives that we can take on for the second test."

Boult finished with a five-wicket bag as the Black Caps finally sealed the victory that was on the cards for days, and while Bangladesh will take some confidence into the remaining two tests after their fighting effort, first blood, and heavy favouritism, goes to New Zealand.