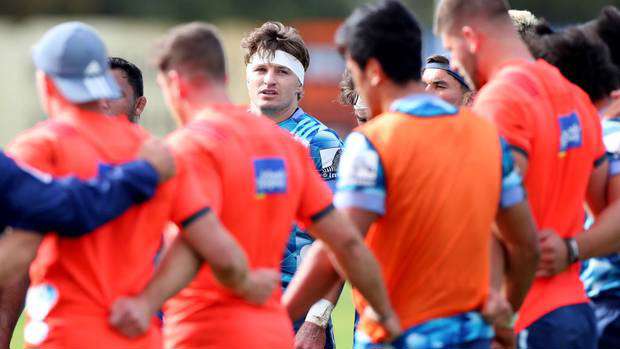 For this first time this season, when Beauden Barrett runs out for the Blues on Saturday night he'll be wearing the No 10 on his back.

Barrett will make his long-awaited return to first five-eighth for the side's clash against the Chiefs in Auckland, with Otere Black fighting to recover from injury to be fit for the match.

Black was taken from the field in last weekend's loss to the Hurricanes in Wellington and while he passed his head injury assessment, was still experiencing some stiffness with neck movement.

"We have always said that we have brought Beauden to the Blues to run the cutter but after the season-ending injury to Stephen Perofeta, it forced a rethink," Blues coach Leon MacDonald said.

"He was our best option for fullback with the luxury of having another outstanding No 10 in Otere Black."

Barrett hasn't played at first-five since the All Blacks' match against Tonga before the 2019 Rugby World Cup - making Sunday's game 324 days since he last wore the No 10 jersey.

Black has been named on the bench, but Emoni Narawa will take his place if he is not ruled fit.

While Barrett moves to No 10, Matt Duffie gets the start at fullback, while Blake Gibson returns from injury in the loose trio for his 50th Blues appearance.

Gibson hasn't been named in the starting side since the opening round of Super Rugby Aotearoa, but has recovered from a hamstring niggle to start at openside flanker, joining Dalton Papalii and Akira Ioane in the loose trio.