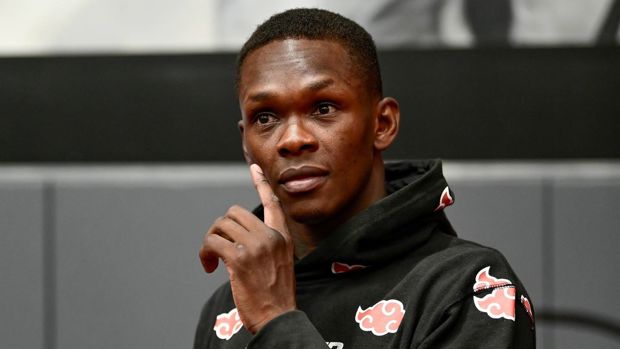 Outspoken UFC star Colby Covington has opened up on his desire to dethrone African Kings Kumaru Usman and Israel Adesanya — but says he will almost certainly get beaten to the latter belt by an Australian whose name he cannot remember.

On the eve of his hyped UFC 268 title showdown with Usman this Sunday, Covington says he would love to be the guy who claims two of the fight company's three hyped African Kings – Usman, Adesanya and heavyweight champ Francis Ngannou.

While the 33-year-old is focused solely on beating Usman for the welterweight strap inside New York's famed Madison Square Garden, and plans to go "through hell and back" to get it, he predicts Kiwi middleweight champ Adesanya would be an "easy" fight for him.

In a wide-ranging interview, Covington also discussed not only his new fight team, or old boomerang assaults, but also branded Usman a "cheating coward", Australia's Alexander Volkanovski a "little midget" and tipped Robert Whittaker to win his hyped rematch with Adesanya early next year.

Right before then forgetting the Sydneysider's name.

Elsewhere, the Oregon product said he would not fight "emotional" for the welterweight belt this Sunday – like he did when losing against Usman in 2019 – while hinting he would also wrestle far more in this fight, as predicted by close friend and analyst Chael Sonnen.

The famed Trump supporter has also requested referee Keith Peterson officiate the bout, claiming Marc Goddard, who oversaw the first clash between the pair at UFC 245, was biased against him because of "my political ideologies".

While Usman has previously said he will never go up to challenge for the middleweight belt while Adesanya reigns, Covington reckons it would be easy work for either of them.

"Yeah, that's a possibility," he said. "I'm not a big welterweight … but I think Adesanya is an easy fight for me or Usman. So I could definitely go up and grab that belt."

However, the title challenger thinks Australia's Bobby Knuckle will get their first, tipping the Sydneysider to reclaim the strap taken from him via knockout in 2019.

"I think Whittaker can get it done," he said. "He's made a lot of good adjustments, he looks like a completely evolved fighter since last time they fought and I think he'll get his hand raised this time.

"I don't think Adesanya will catch him with a shot like that (again).

"It was kind of a lucky knockout last time but I think that ah … what's his name … Whittaker will get the job done."

Elsewhere, Covington also renewed hostilities with featherweight champ Volkanovski, who he bagged earlier this year when named as a head coach on The Ultimate Fighter – "little midget, don't talk shit to someone you can't beat up" – while also reliving his famed boomerang assault on the streets of Sydney four years ago.

Only days out from an Aussie card in 2017, which he was attending as a guest fighter, the American found himself in a heated verbal with Brazilian heavyweight headliner Fabricio Werdum – with the pair exchanging words outside the fighter hotel before Werdum hurled a boomerang he had bought only minutes earlier.

Run into him since?

"No, and he's lucky I haven't," Covington cackled.

"He's lucky I didn't knock his ass out in that hotel parking lot, man. The only reason I didn't was the UFC was holding me back saying 'he's our main event, don't ruin our main event, blah, blah'.

"If I see him, he's old and he's washed up and got no chin. You see him getting knocked out in the D Leagues.

"So if he runs into raw American steel and twisted sex appeal I promise you he's going to have another thing coming."

While as for a prediction this Sunday?

"You have to pay attention.

"But I am getting my hand raised. I'm going through hell and back, but I promise you I will be the undisputed welterweight champion of the world."