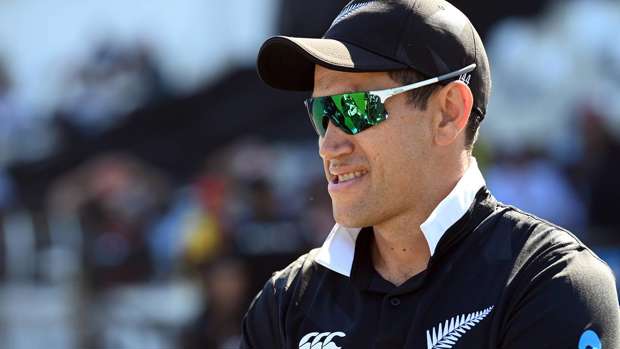 The glamorous Twenty20 club competition was thrown up in the air last night with two players in the Kolkata Knight Riders - Varun Chakravarthy and Sandeep Warrier – testing positive to coronavirus. The team's match against Royal Challengers Bangalore was subsequently postponed.

The Knight Riders are coached by former Black Cap Brendon McCullum and includes current New Zealand internationals Tim Seifert and Lockie Ferguson. Players and staff have been placed in isolation, and have entered a daily testing routine.

Speaking at the Black Caps training base in Lincoln, Taylor notes the dire situation in India, and feels for their people.

"You see all the footage on TV and things have escalated very quickly," he said.

"I've been there many a time before – they're lovely people and they love their cricket, but this
is a sideshow and hopefully they can get on top of this coronavirus ASAP and get back to living a normal life. It's pretty disappointing to be watching and wish them all the best.

"New Zealand Cricket and the Players Association are in regular contact with the players over there. I'm sure they're all in slightly different boats in terms of where they fit in and how they feel, but I'm sure whatever happens over the coming days and weeks, the right decisions will be made."

Taylor says he's kept in contact with players and coaches over in India. "They're all in different bubbles and each team's slightly different."

Black Caps spin bowler Ajaz Patel, who's also at training camp in Lincoln, says he knows many people personally in India who are navigating through a difficult time.

"The situation's not that great. Being in New Zealand we're quite sheltered from it and also knowing a lot of friends and family over there are going through Ramadan at the same time… certainly not an easy time for the people in India and I dearly hope that it does get better pretty quickly," he says.

"You just feel so helpless being on the other side of the world, there's really not a lot you can do."

On whether the IPL should go ahead or be called off, Patel says he sits on the fence.

"It's a choice that the BCCI [Board of Control for Cricket in India] has to make and what they see fit and how they have go about it. As players we just have to go with what it is and what we're comfortable doing. If I was in that situation whether I'd be playing or not.. I can't really tell you.

"I hope that it does bring some joy to some people… if it's bringing a little bit of joy then why not."

The IPL released a statement following the outbreak, confirming the Knight Riders' medical team is in continual contact with the two affected players and determining close and casual contacts of the two cases.

NZ Cricket said it is working with the IPL and monitoring the situation closely.

"We are continuing to work with our members playing in the IPL in what is a fluid situation," a NZ Cricket spokesperson told the Herald.

"Clearly the circumstances they find themselves in have changed a bit yesterday with some local players and support staff getting Covid in the bubble.

"None have requested they come home yet but we're continuing to monitor developments."

Taylor says he's been fully vaccinated ahead of their two tests away to England and World Test Championship final against India in Southampton next month. He adds their trip could yet be impacted with the virus well and truly prevalent around the world.

"It's an evolving beast – it changes all the time and the UK could change while we're over there. You don't want to think about it too much, it is what it is and you just deal with what's in front of you. We're pretty comfortable that the players are getting looked after overseas as much as possible and New Zealand Cricket and the Players Association have our best interests at heart over the coming weeks and months."

Meanwhile, it's been confirmed Taylor has a grade one muscle strain to his left calf following an MRI scan yesterday.

Taylor sustained the injury during the first day of camp yesterday in Lincoln, and will remain with the team to rehabilitate the knock over the coming days.

"A lot of important cricket coming up, best to actually get to the bottom of what it really is. Glad I got the MRI yesterday," he says.

"I got a bit of acupuncture which actually probably made it sorer than it was before, but I feel comfortable."