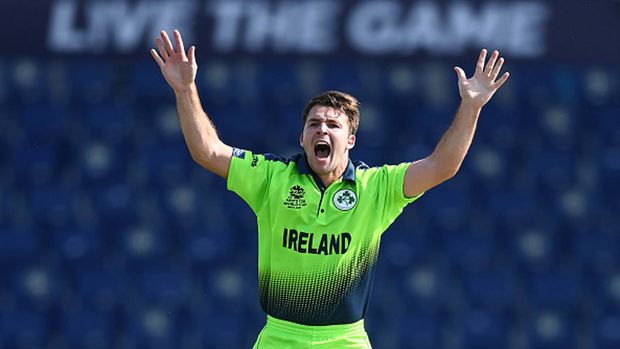 The Netherlands were 2/52 in the 10th over of their innings when the 22-year-old seamer rattled the Dutch middle order with a quartet of dismissals in his second over of the tournament.

Campher first removed Colin Ackermann with a loose delivery down the leg side that was gloved and caught behind by Irish wicketkeeper Neil Rock.

The right-armer then trapped Ryan ten Doeschate and Scott Edwards LBW in his next two balls to become the first Irishman to take a hat-trick in international cricket.

But Campher wasn't done there, lastly dismissing Roelof van der Merwe with a full delivery that was edged back onto the stumps.

"Curtis Campher what are you delivering? Are they cannonballs or cricket balls?" Indian broadcaster Harsha Bhogle said in commentary.

The wickets of Ackermann and Edwards came after successful DRS reviews from Irish skipper Andy Balbirnie.

The Netherlands were suddenly 6/52 and Campher had career-best bowling figures of 4/13 to his name.

Before Monday, Campher had only taken three wickets in his T20 international career. He made his international debut in 2020, and has since represented Ireland in 10 ODIs and four T20s.

Curtis Campher in his second over against the Netherlands in the 2021 T20 World Cup:

He became the third bowler in T20 history to grab 4 wickets on 4 balls. 👏👏#T20WorldCup #CurtisCamper pic.twitter.com/rwY83F0oQa

A double hat-trick.
This #T20WorldCup is delivering so far. Absolute scenes.

The Netherlands were eventually bowled out for 106 at Abu Dhabi's Zayed Cricket Stadium, setting Ireland a modest 107-rub target for victory.

Incredibly, the Dutch innings featured five golden ducks, the first instance of it happening in over 15,000 T20 matches.