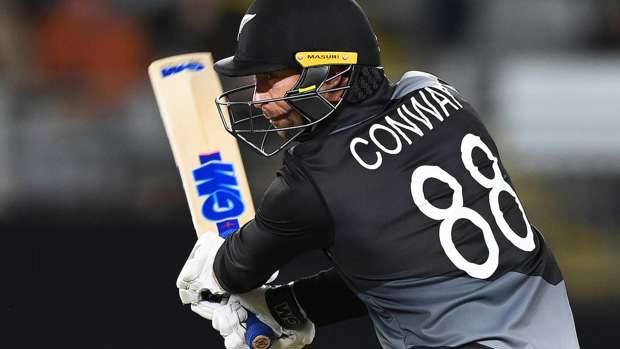 Devon Conway has found himself in the Black Caps test squad after a stunning international debut last week.

But not purely because of his form, however, as the South African-born batsman provides injury cover for BJ Watling who sustained a hamstring niggle in the opening round of the Ford Trophy.

Conway has been given the nod, nonetheless, and has travelled to Hamilton to join the squad at training, ahead of Thursday's first cricket test against West Indies at Seddon Park.

Coach Gary Stead with an injury update ahead of the Test squad’s first full training at Seddon Park. Devon Conway has traveled to Hamilton to join the squad as batting cover with BJ Watling monitoring a hamstring injury picked up in the opening round of the Ford Trophy. #NZvWI pic.twitter.com/IhRFyPJOCZ

"We have another injury cover, Devon Conway will cover for BJ Watling who has a slight hamstring niggle that he picked up in his last Ford Trophy match. What that would mean is that Tom Blundell will take the gloves if BJ was ruled out and bat in the middle order which is why you'll see Devon Conway at training today," Stead said.

Conway earned his first cap for the Black Caps in their five-wicket win over the West Indies in Friday night's opening T20 at Eden Park; his 41-run knock a vital innings in the victory.

He then helped Glenn Phillips in a 184-run partnership world record in the final T20 which saw the Black Caps claim a 72-run victory.

The Black Caps claimed the series 2-0.