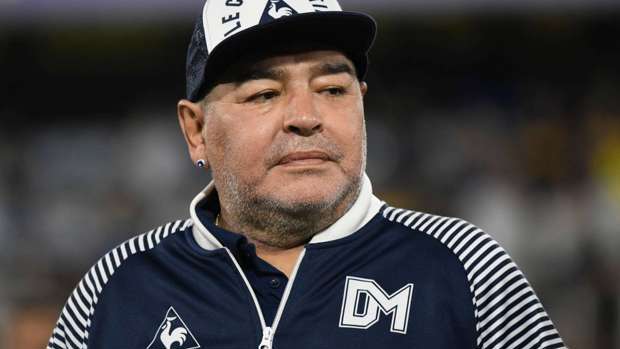 Diego Maradona's autopsy has revealed the football legend didn't have any alcohol or narcotic drugs in his body when he died last month.

The 60-year-old Argentinian football star had been battling health issues when he died on November 25.

Despite a history of drug use, the preliminary autopsy determined that Maradona died in his sleep of acute pulmonary edema, a build-up of fluid in the lungs, because of congestive heart failure, according to reports.

The toxicological report also detected no alcohol or illegal substances but the presence of psychotropic drugs used to treat anxiety and depression.

The report also revealed that Maradona's heart weighed almost twice that of a normal heart while his lungs, kidneys and liver were all damaged.

His daughter Gianinna Maradona went on social media saying her father was not himself in the weeks before his death.

"All the sons of b------ waiting for my dad's autopsy to reveal drugs, marijuana and alcohol. I am not a doctor but I saw him very swollen. A robotic voice. It wasn't his voice..." she wrote on Twitter.

The football great struggled with addiction to cocaine and alcohol and had been plagued by poor health in recent years.

Maradona was buried last month in a private ceremony attended by only two dozen people following a vigil at the presidential palace where tens of thousands of weeping fans lined up to filed past his coffin.

In a stunning statement released the week after his death, Maradona's lawyer Matias Morla claimed the first ambulance took half an hour to arrive and called the delay "criminal idiocy".

Maradona had a nurse looking after him, who called emergency services. Responders tried to revive him but it was too late.

"Today is a day of deep pain, sadness and reflection," Morla wrote.

"I feel in my heart the departure of a friend whom I honoured with my loyalty and companionship until his last days. I made my farewell with him in person and the wake should be an intimate occasion.

"It is inexplicable that for 12 hours my friend has not had attention or control from the legal health personnel.

"The ambulance took more than half an hour to arrive, which was CRIMINAL IDIOCY.

"This fact should not be overlooked and I am going to ask that the consequences be investigated until the end. As Diego said, 'You are my soldier, act without mercy'."

Alfredo Cahe, who was Maradona's doctor for more than 30 years and helped him treat his cocaine addiction, also questioned the decision to move the Argentina superstar from hospital on November 11 following his brain surgery.

He told Argentine news show Telefe Noticias: "Diego wasn't looked after as he should have been.

"He should have been kept in hospital, not taken to a house which wasn't properly prepared.

"I'm in a state of complete shock. I've had so many ups and downs with Diego for 33 years and he's just died in an unusual way.

"I have a lot of doubts. I don't know why he was taken to that house.

"When he left hospital it didn't seem logical to me. He should have stayed in a place with a good infrastructure, like when we took him to Cuba."

Cahe said he visited Maradona after his operation but wasn't able to speak to him because of the medication he was on.

"A woman close to him told me Diego had told her that he was deeply distressed. And that he felt he had done everything in life," Cahe said.

The first photo of Maradona to emerge after his operation was with his youngest son Diego Fernando, which would ultimately be his last following his tragic death.