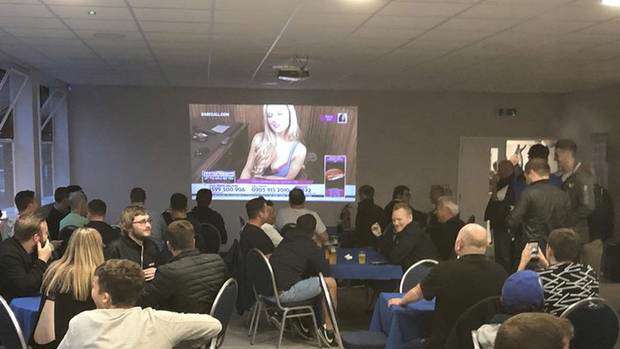 An England football team is investigating how fans were given x-rated halftime entertainment after a television was switched to a televised sex line.

The incident happened at Bristol Rovers' home ground in a match against Crawley Town.

A television in the members room aired a channel called Babestation, a sex line where woman answer calls in their underwear.

Bristol Rovers said an investigation was under way.

The League One club issued a statement, saying: "The club believes someone that was attending in the bar was using a universal remote device to affect the TV output.

"The matter will be fully investigated, however the club believes they have photographic evidence of the individual concerned and they will be dealt with appropriately."

Supporters tweeted videos and pictures showing the channel being aired at the Memorial Stadium.

i love this club pic.twitter.com/L1E36AJOCs

Babestation has been put on the halftime bar at Bristol Rovers 😂😂😂 pic.twitter.com/a2b5z2ohvb

One viewer told BBC Radio Bristol: "To be honest the Flake advert was more racy than what we saw last night.

"It was quite amusing really. The first time we thought it was just an advert but then the football came back on and then whoever had a remote control put it back on again and there was a massive cheer."