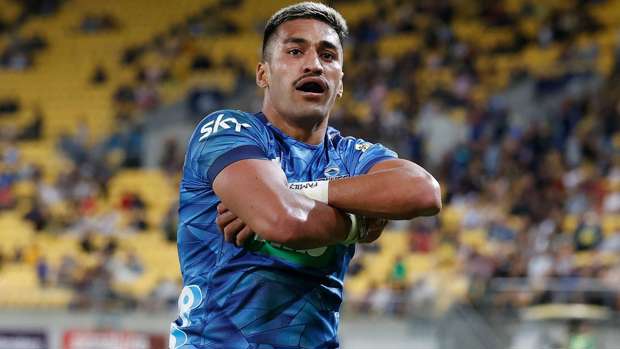 Rieko Ioane has addressed Sevu Reece mocking his try-scoring celebration in the Crusaders victory over the Blues at Eden Park on Sunday, saying it will fuel the fire of the team's rivalry.

All Blacks wing Reece cantered to the line to claim the Crusaders fourth try in the 78th minute, while the Blues were reduced to 14 men with Ofa Tuungafasi in the sin bin, to seal the 43-27 victory for the visitors.

After dotting down, Reece proceeded to cross his arms and stare at the crowd in an exact replica of the celebration Ioane has made his own this season.

The cheeky jibe was not lost on Ioane, the All Blacks and Blues midfielder.

"He's a cheeky fella," Ioane said of Reece at Blues training on Tuesday. "It's awesome gamesmanship. It's good to know I'm not the only one doing it and that people actually notice as opposed to just mocking me. Full credit to them, winners reap the rewards, he scored so it's awesome for him.

"I definitely wasn't happy about it, don't get me wrong. It's stuff like that that gets you going and adds to fire. Having Sevu get one up on me, or your mates in the other team get one up or you, is a pretty hollow feeling. You definitely park that deep and once we face them again or even the next game it will be more fuel to the fire.

"I actually didn't see it during the game so he came round and asked if I saw it. It's good gamesmanship from them so I enjoy that sort of banter on the field."

Try-scoring celebrations and Ioane go together like fish and chips. It's his way of showing his personality on the field and he intends to continue showing swag with celebrations.

"It's spur of the moment," Ioane said. "I like to express myself through my game, that's why we train so hard all year round. When it comes to that 80-minute window that's the fun time of the week so I like to have a bit of fun with it.

"It's some peoples' cup of tea and others not. I'll keep being me."

n his second full season at centre, after shifting in one spot from the left wing, Ioane is pleased with how his game is developing. In three matches this season he has beaten 10 defenders, made five clean breaks and 228 metres from 29 carries.

"I feel it's progressing nicely, getting time at 13 is awesome for me and we're starting to grow our combinations as a backline. Other than Mark Telea getting concussed the week before the selections have been pretty consistent so that helps, too."

Telea and All Blacks flanker Dalton Papalii, both of whom missed last week's loss, are expected to return from concussion for the Blues trip to Hamilton on Saturday night. Telea is likely to replace Bryce Heem on the right wing while Papalii is expected to step in for Blake Gibson, who suffered a head knock against the Crusaders.

The Blues front row is certain to undergo further changes with Tuungafasi facing a lengthy suspension – possibly for the remainder of Super Rugby Aotearoa – for his cleanout attempt that connected with Scott Barrett's jaw.

While Tuungafasi received a yellow card, the citing commissioner deemed it should have been red which would have been his second in six games. His judicial hearing is set down for Wednesday night, and with a blemished record he is expected to find few favours.

Leni Apisai, who opted not to take up an offer to Major League Rugby in the United States this year, is expected to replace Eklund on the Blues bench.

"Playing week to week against your All Black mates the challenge never gets any easier. I know Anton is at 13 now so I'm looking forward to Saturday night.

"It was an awesome comeback they made against the Canes. The battle of the Bombays is always a big one. It wasn't long ago they had 20 on us at their home so it's no easy feat going there and coming away with the win."