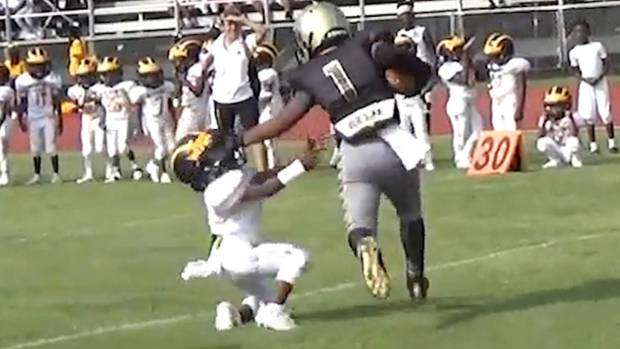 A six-year-old American football player in Texas has found instant fame after footage of him dominating his opponents was posted to the internet.

Aiden Smith, who stands at 156cm and weighs 60kg, can be seen brushing aside attempts to tackle him as he breezes his way downfield to a stunning touchdown to the joyful cries of his supporters.

One video of Smith, posted to Twitter, has been viewed almost a three million times in less than a week.

Went to support my team this weekend and our 6U played this kid and he is huge!! Biggest most athletic 6 year old I have ever seen. He also played DT. He may have an offer next year!!🤣🤣🤣🤣 pic.twitter.com/bNrxJLyGcc

To put Smith's size in perspective for New Zealanders, Auckland Rugby doesn't even bother to differentiate between the weight of its junior players until they are in year three of primary school, around seven years old, and even then it's only between children over and under 31kg.

Meanwhile, the coach of Smith's side says he's never coached a boy so large and with such a developed skillset at his age.

"His skills are amazing, he's big, he's fast," Tony Davis told TMX News. "He's super strong, when we practice and I work in with him, I have to really use my grown man strength sometimes to hold him off.

"He's incredible on skills, the sky's the limit for him in skills."

Smith's father says he's elated with the attention his son is gaining from his footballing exploits.

"Just to see him have the confidence and accolades that he's getting right now, it's absolutely amazing," the elder Smith told TMX News.