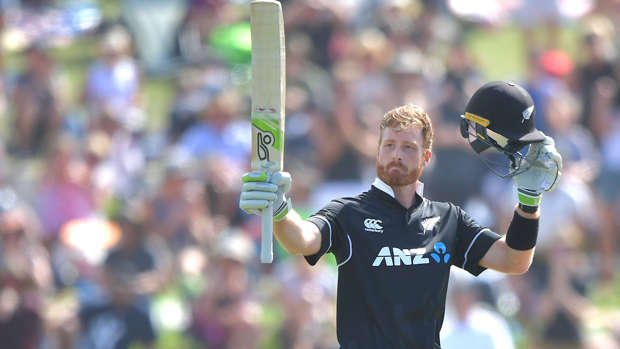 One hadn't played international cricket since March, the other had been out of the side for 18 months. But for Martin Guptill and Jimmy Neesham, it was like they had never been away.

Guptill shone in the Black Caps' opening ODI against Sri Lanka with a superb 138, before Neesham blasted an incredible 34 from an over, then took 3-38, as the Black Caps claimed a 45-run victory at Bay Oval in Mt Maunganui.

In between, Kane Williamson (76) and Ross Taylor (54) provided their usual contributions, as New Zealand again showed their strength in home conditions to ensure Sri Lanka's bowling struggles continued, racking up a mammoth 371-7 after winning the toss and batting first.

Having won just 17 of their last 59 ODIs since they last visited New Zealand, Sri Lanka were always likely to be up against it in this three-match series, but their bowling was incredibly limp, and their fielding didn't help the cause as they were ruthlessly plundered all around the ground.

However, the target always going to be too tough, and horrendous innings' from Dinesh Chandimal (10 off 18) and Asela Gunaratne (11 off 23) killed any realistic hope they may have had.

Victory was always an unimaginable outcome, after Guptill led the way in his return to ODI cricket, having missed the Pakistan series due to a calf injury. The experienced opener crafted his 14th ODI century in a splendid innings, barely offering the visitors a chance as he mixed power with placement.

Part of his success was admittedly due to a disastrous Sri Lankan bowling display. Captain Lasith Malinga contributed more head-high no-balls (three) than wickets (two) as he was swatted for 78 from 10 overs, Nuwan Pradeep went for 72 from eight, and the Sri Lankan spin duo of Seekkuge Prasanna and Lakshan Sandakan were easily accounted for – going for 60 and 64 runs respectively.

It was the batting against the spinners which was the most impressive part of the innings – until Neesham went berserk, of course. Guptill and Williamson expertly accumulated, playing to all areas of the ground in a partnership of 163 – New Zealand's second-highest second wicket stand in ODI history.

Williamson – one edge aside in which he was saved by his trademark soft hands – looked ever so comfortable once again in reaching 76 off 74 balls, to the point where it was a surprise when he departed, chopping on to Pradeep.

It seemed a surprise to him too – throwing his head back in frustration, but Guptill and Taylor carried on where he had left off. Taylor smacked a 34-ball 50, while Guptill became the fifth New Zealander to reach 6000 ODI runs, then kept going through to 6100, passing Brendon McCullum for fourth all-time as he crunched 11 fours and five sixes in his 139-ball innings.

He ensured the hosts would post a strong total, but Neesham then turned it into a fearsome chase. The recalled all-rounder blasted five sixes in the innings' penultimate over from Thisara Perera, as part of a phenomenal 47 not out from 13 balls, and had a chance to break the record for most runs in an over.

With the help of a no-ball, 33 runs came from the first five deliveries. However, just as an unthinkable record loomed, and the possibility to join an exclusive club of players to hit six sixes in an over, Perera finally found his line, and Neesham could only swat a single.

The end result was 34 runs off the over, and 15 more were smacked the final over to send the Black Caps to their seventh highest ODI score. If not for running out of time, Neesham would have claimed the fastest ODI fifty of all-time, but his contribution didn't end there – with three wickets capping off a dream return, and another Black Caps victory.